Mark Trail generally doesn’t do cliffhangers per se, preferring to let its narrative unspool in a steady, undifferentiated flow of lunacy. But this Saturday strip is enough to get even those sad souls who don’t spend their weekends thinking about Mark Trail eager for Monday’s installment. Future Governor Frank’s 100 percent foolproof scheme to run Mark off the road to his death, an act which nobody could possibly trace back to him unless they thought about what’s happened in this plot so far for more than two or three seconds, seems to have hit a snag. But what could it be that’s elicited such a mega-bolded WHAT TH’– from our crafty politician? Could Mark’s car be sprouting a protective fist of justice, hurtling out of the front grill so powerfully that not even Frank’s half-ton truck will survive impact? 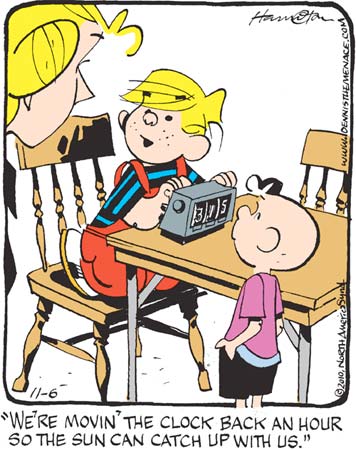 By promoting the so-called “Daylight Savings Time” that the secret One World Government has imposed upon us to crush free societies everywhere, Dennis has achieved his highest levels of menace yet.