Your comments of the week in a moment, but first, an exciting photo of a reader wearing Comics Curmudgeon merch! I have been terribly remiss in keeping up my store — surely some t-shirt worthy catch phrase/publicly available clip art combo is out there for the making? — but that hasn’t stopped faithful readers from donning classic merch! For instance, faithful reader KarMann is here modeling a classic “Work them like a claw and call me Randy” t-shirt, made all the more appropriate by the fact that his non-Internet name is, in fact, Randy! 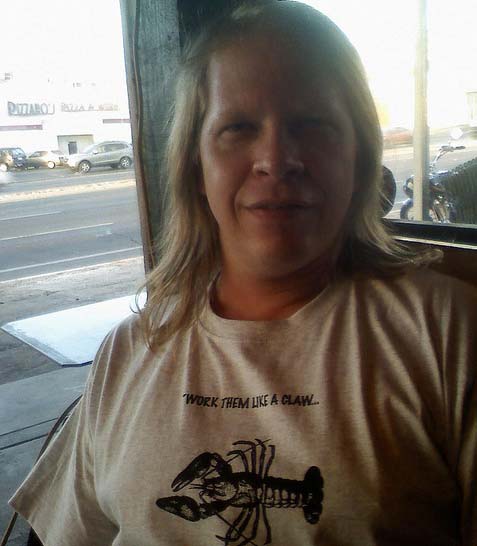 (Take a step into the wayback machine to research the origin of this phrase, though trust me, it doesn’t make that much more sense in context.)

And with that out of the way, brace yourself for your COMMENT OF THE WEEK!

“There’s still time for this to be the surprise uncovering of Milford’s largest underground oregano ring! ‘I just wanted to cook so that I could find someone that loves me!!’ THERE’S STILL TIME!” –Black Drazon

“Shouldn’t there be some kind of, I don’t know, italics or something to show that bird-momma is groaning and not actually saying ‘Groan’? Or maybe she is, and we learn that the birds who rule this upside down world may have learned the art of annoying clichés like ‘Y is the new X’, but they have yet to master the subtleties of the onomatopoeia.” –Francisco Arrowroot

“Given Marmaduke’s aggression and history of willful disobedience, I assume he was never neutered, which makes this image of two children staring up at his airborne scrotum even more disturbing.” –JC

“Explain to me again why Lucky has to go to some other forest when the Johnsons live in the very forest where Lucky is from, you know, the one where he lived with his mother until she stepped away for five minutes and he was stolen by a pair of pink-skinned bipeds? Are they worried about Frank seeking revenge? Leave it to Mark Trail to have witness protection for wild animals, but no local law enforcement to arrest people who trespass or commit assault.” –Mr. Goboto

“That independent thinking and competent decision making must stand Adrian in good stead as a doctor. ‘So, Mr. Harris, I was going to remove your gallbladder as planned, but the anesthesiologist told me that was considered passe nowadays, and so we were going to go for an appendectomy but the nurse said if she had to assist at another of those she would just die of boredom, and then your wife chimed in and well, you know how it is, getting everyone to agree on something, so, long story short: you now have a baboon heart and a smaller nose.'” –Violet

“Yes, only cowards don’t go with their heart. You don’t want me to think you’re a coward do you? DO you?” –TheTJ

“Thanks for pointing out the Tommie story lines. My brain has begun to tune her out. It’s like those Magic Eye things from the ’90s. I stare and squint at A3G for the longest time until you lean over and tell me, ‘It’s about Tommie. Her aunt is in town or something,’ and then I pretend to see it so we can move on to making fun of Crankshaft.” –Thinks He’s Brenda Starr

“I don’t really believe that Adrian is obsessed with the opinions of others, though: if that were true, how could she still have that haircut?” –Trilobite

“OH LOOK IT’S ANOTHER LUMPY-FACED WHITE LADY WITH ORANGE HAIR. Apartment 3G is turning into Being John Malkovich, but with lumpy-faced white ladies with orange hair. I guess this one has a double chin to indicate she’s not Ruby (whose distinguishing accessory is dorky bows) or Margo’s shooty stepmum (gun) or Aunty Iris (jaunty turtleneck and ‘That Girl’ flip) or the makeover lady (equally unappealing daughter) BUT JESUS CHRIST WHY DOES EVERYONE IN THIS STRIP HAVE TO BE A LUMPY-FACED WHITE LADY WITH ORANGE HAIR.” –JupiterPluvius

“Apparently Thel was on the phone with Blondie, signing off with ‘Who’s got the most improbable bust-to-waist ratio now, bitch?'” –Uncle Ritzy Fritz

“I’m taking the laughable popularity of Les’s book — I’ve seen shorter lines for Saul Bellow — as an indication of just how awful life in Westview is. ‘Lisa Moore? She’s one of the lucky few who made it out of here, right? What’s her secret?'” –Spunde

“What’s sad with Apartment 3-G is the lost opportunity. You have the perfect setup — ‘Who is Prissy, Mrs. Bloom?’ — and then no punchline at all. Mrs. Bloom could have at least responded, ‘Why, Margo, of course!’ before launching into how she’s actually referring to her cat, who, like Margo, drinks milk from a saucer and frequently bathes and sleeps.” –Dood

“This is why Frank in Mark Trail would be a great governor: complete transparency. Every shady deal or legislative malfeasance would be shouted out an open window to the waiting press below.” –ArchieNemesis

“I’m OK with Frank’s pro-homicide platform, but how’s his prostate?” –Walker of Dog

“I particularly like the way The Greg & Mort Walker Amalgamated Humor Corporation, LLC decided to put ‘doggie bag’ in quotes, as though it’s some obscure, industry-specific phrase that the rest of us who aren’t ‘in the biz’ might not recognize, which could, in turn, lead us to mistakenly assume that Sarge has simply given up all pretense of dignity and is now blatantly raiding Otto’s food bowl in broad daylight.” –Ringo Beaumont III

“That’s the shittiest looking weed ever. Those are totally XXL Chalupas from Taco Bell.” –Hamsterpants

“Dennis appears to be stealing his dialogue from Family Circus. This is a good move for him — few things are as menacing as Jeffy’s dead eyes.” –Master Mahan

“I think the reason Crankshaft is complaining about the local Cleveland football team in the most generic sense is that someone must have realized how bad it would look to have a comic strip with an angry old white man complaining relentlessly about ‘the Browns.'” –Lorne