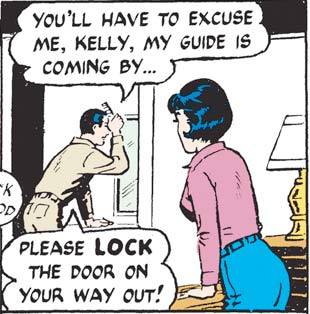 Let’s cap off a hilarious week in Mark Trail with this hilarious panel! Longtime Trail readers know that the idea of Mark having sex with anyone is utterly laughable, but this panel pretty much seems to tease us with the concept of a Mark-Kelly tryst, as Mark tidies himself up and Kelly offers the first T&A cheesecake shot ever to involve a polo shirt and mom jeans. Our first clue that something is amiss is that Mark is combing his hair. Mark’s hair doesn’t require anything like “combing” for maintenance! It’s a single ink-black unit that hugs his head, needing only the occasional regreasing. Clearly we’ve slipped into some sort of parallel universe, or perhaps are seeing only the images in Kelly’s fevered imagination. 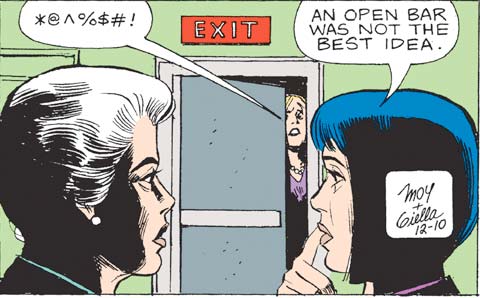 And let’s cap off a hilarious week in Mary Worth with this poignant panel, as two strong men attempt to drag Jill out to the back alley and she desperately pushes her face back into the reception hall, trying to get in one last cuss word. You have to admire her stamina, and her determination to save Adrian from herself. “*@^%$#!” she shouts, as if this is the “*@^%$#” that’s going to push Adrian over the edge and get her to realize that marriage really is all a scam. “Yeah, what am I doing, committing my life to this guy,” Adrian thinks. “*@^%$#ing A!”

Because of Apartment 3-G’s weird fashions, which seem to be representative of no particular era or cultural milieu, it’s hard to get a sense of exactly how old the main characters are supposed to be. Well, here’s your proof: they’re somewhere around 13.