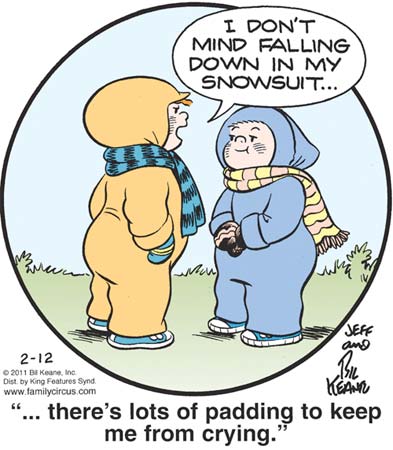 Since I so commonly slam on the anonymous Photoshop jockeys who color in the comics with seemingly little care or sense, let me offer them some kudos today for correctly identifying the orange-suited Keane Kid in this panel as Jeffy and filling in his tiny bit of visible hair in the correct ginger color. Could they tell because that hair had a bit of a wave to it (in contrast with Billy’s straight blond hair), or because only Jeffy would be proudly announcing that he needs to be protected by a thick layer of cushioning to prevent him from busting into tears due physical contact with the world? While we will probably never know the answer, I do think we need to note before moving on that Jeffy and his companion are bundled up in their snowsuits despite the fact that there is no snow visible whatsoever.

“Damn it, I’m trying to woo Trey here, but why would he pay attention to me when she looks so ravishing in her bright orange Chairman Mao suit?”