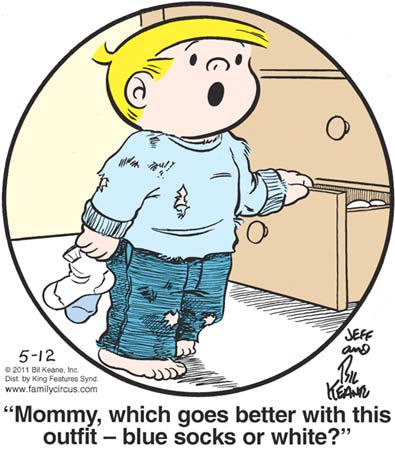 I suppose the joke here is supposed to be kind of the flipside of the Mother’s Day installment; both have at their core the sad fact that the Keane Kids are semi-feral slobs who would, if not for Mommy’s constant attention, live in their own filth. But I’d like to believe that we’re seeing a progression here from Sunday’s episode: after the unseen fiasco of her very special dinner, during the course of which every single meticulously arranged outfit was in short order coated with a viscous layer of ketchup and boogers, she just decided to give up entirely. What we’re seeing here is the nicest outfit that Billy has left only a few days after his mother stopped grooming him. Soon the kids will be lurching around the house in gunny sacks (lurching because nobody will bother cutting out arm or leg holes for them).

Ha ha, Herb, your daughter has no time for your weak and ancient Semitic sky deity! She will only offer prayers to her awesome and majestic insect god!