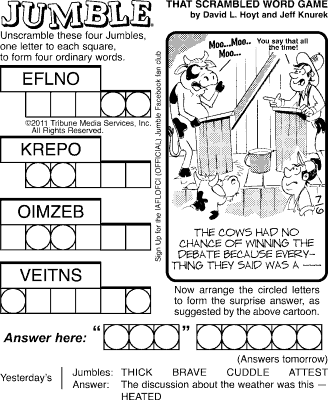 Wow, this is an unexpectedly grim scenario for the Jumble. What could possibly be the subject of this epic debate between man and cow? I’m guessing it’s “Resolved: It is morally acceptable for humans to eat cows,” which explains why both parties are so angry: this is no mere academic enterprise. Unfortunately, the cows had no chance of winning the debate because everything they said was a series of moos and lowing noises. “You’ll have to speak English if you expect us to respect what you have to say!” jeered the farmers. Then, having declared themselves the winners, they led the cows off to the slaughterhouse.

Since (despite what you might guess) I don’t own an extensive collection of mouldering Wizard of Id paperbacks from the ’60s and ’70s, I have no idea whether the recent trend in the strip for the Wizard to be more cruel and diabolical is a return to the character’s origin or just a what-the-hell-why-not impulse from the creative team, but I can’t say I entirely disapprove of it. Today he lives out every science geek’s fantasy of making those who find his hobby boring into unwilling experimental subjects. 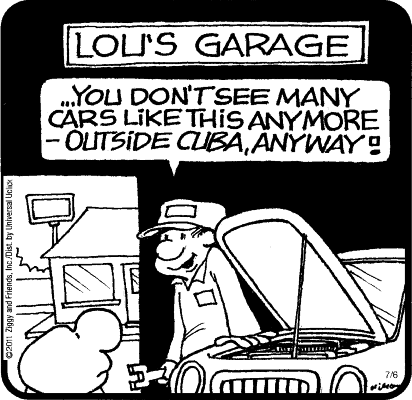 At last, the truth comes out: Ziggy is a damn dirty communist. I don’t approve of Joseph McCarthy’s methods, but if we could maybe arrange a Congressional hearing at the climax of which Ziggy would be blacklisted, that’d be great.