In Chilean Spanish, a “nuco” is a nocturnal bird, like an owl. So for Mexico’s Cinco de Mayo celebration, Dag’s diner is serving up grilled Chilean owl. I would’ve gone with the sea bass.

Hutch was firstborn, for sure. 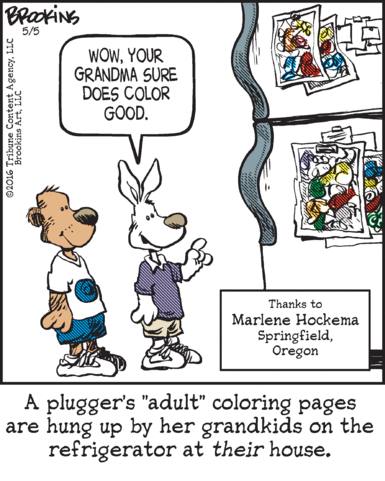 Yes, like the Wiz is exhausting that adorable little fart in the last panel there.

In the current thread among so, so, many, goat-goateed Notta Fallar framed Tracy by releasing a video of herself making out with Putty Puss disguised as Tracy. Bluenose Mayor Armstrong suspended him, so he called in a favor from pal Oliver Warbucks, who hired lawyer Mr. Kleen to press Tracy’s case. I was certain Mr. Kleen was going to be an intentionally ironic name for any lawyer who works in Dick Tracy (like Law and Order’s Judge Softon Crime), but nooo – he’s just some guy with a Purell® jones and apparently, a real aversion to legal work.

Jeremy Duncan used to have a serious case of the hots for his guidance counselor. Farewell to adolescence, I guess. Who knows what comes next? Not him!

Your occasional reminder that one of the bits of medieval cultural flotsam Wizard of Id makes comedic hay out of is torture! Remember, torture was an omnipresent fact of like in the Middle Ages, and since the Wizard of Id is a 100% accurate depiction of medieval life, it would be narrative malpractice to not have torture jokes. Shoutout to today’s strip for really going all in on the details! The bellows in panel one shows you the technology that was once used by the state to literally inscribe its power onto its subjects. The Spook is usually pretty chill about his eternal imprisonment, but as he dangles from the wall in the background, he looks genuinely terrified about what’s about to happen. And the smoke wafting up from the red-hot iron, demonstrating the world of agony that’s about to be “communicated” to the hapless prisoner — mercy! Wholesome laughs all around! 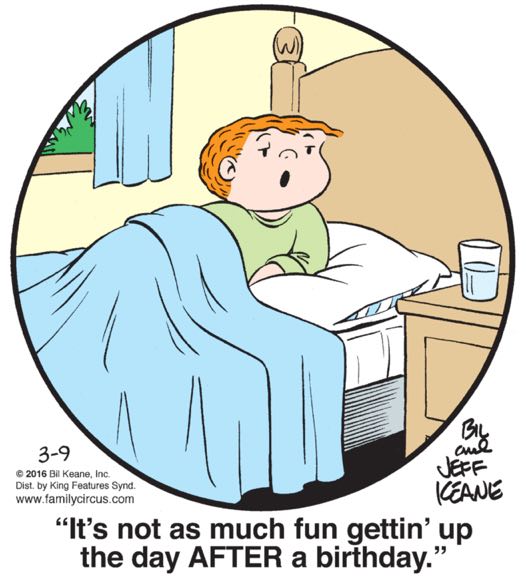 Bad news, Jeffy: once you’re done with childhood, intrusive thoughts about your inevitable death start on your birthday, not the next morning.

One of Crankshaft’s running jokes/verbal tics is calling Google “Granpa Google,” which I actually sort of like. It’s fun and whimsical to imagine Google as a helpful, chatty elderly relative, rather than what it actually is, which is to say an unthinkably vast database of information with a shockingly efficient search algorithm owned by an immensely powerful and inscrutable dystopian corporation. At any rate, Granpa’s got this one wrong! A real anti-matter brownie would in fact instantly explode into an tremendous blast of destructive energy the moment it came in contact with the air, wiping out these bus drivers and everyone else for miles around, which, you know, we should be so lucky.

As like a million people pointed out to me when I wondered about it, the new-ish artist of Wizard of Id is none other than Mason Mastroianni, grandson of strip co-creator Johnny Hart. Considering how famously devout Hart was, it’s interesting that the big innovations in this strip over the past few weeks have been highly sexualized supernatural beings.