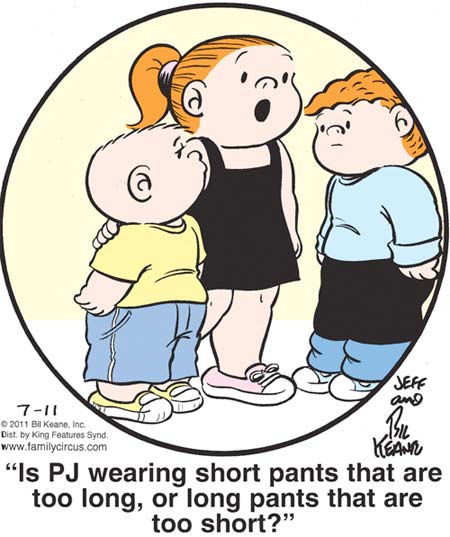 I actually don’t feel any need to discuss PJ’s pants (they’re called “men’s capris,” and they’re not particularly rare these days), but I do think we should take a hard look at Jeffy’s. For years I’ve heard jokes about his “leg warmers.” I’ve always assumed that he’s supposed to be wearing dark jeans that are cuffed up at the bottom, like he’s some kind of 1950’s tough, but in today’s version he just seems to be wearing some kind of featureless black leggings that have a blue stripe at the bottom, stretching from his ankles almost all the way up to his knees (not that it’s easy to figure out where the knees are given his freakish Keane Kid anatomy, yeesh). Anyway, I’m guessing that Jeffy looks so sad because he know his sister’s vicious fashion inquisition will be turned upon him in short order.

I was going to say that White Collar Prison Riot and Crash Dancing were the all-time funniest things ever associated with the Archie franchise, but then I read this.

Oh, and hey! Did you know today is the seventh anniversary of when I started this blog? That’s, um, a lot of blogging. Good lord I’m old.