Today’s Archie is neat little package justifying the economic stratification of society. You may believe that the 1% do less to earn their vast wealth than, say, factory workers or service personnel, but look! A single, dignified bead of sweat drips from Mr. Lodge’s brow, indicating that he too, in planning LodgeCo’s next strategic moves, is performing labor for which he deserves renumeration. Archie, in the background, demonstrates the real fecklessness of the parasitical taker classes, perspiring with anxiety over the destruction he’s caused, not thanks to good honest work. The message is clear: sweat smarter, not harder.

The producers of the new Starbuck Jones movie have decided to shoot in blighted Northern Ohio, because of generous tax credits offered by the state it would be convenient for the lead actor and writers. This has caused a lot of rejoicing, but as we all know, the Funkyverse has a very powerful Law of Conservation of Misery, so clearly this has to be a serious problem for somebody, sooner or later. How long will that bus stay wedged in that alley before the kids have to turn to cannibalism?

Remember, the comics pages’ most mediocre superhero deserves an extremely middling rogues gallery! I honestly can’t get enough of any of these people being insulted to their face.

Sure, “Kids Today” and “Technology Bad” are two of the classic themes, but if you want to go full plugger, Mom, you gotta grow the tail.

Even the folks at Team Archie know this joke would be unpublishable with the roles reversed. Hey panel-2 Veronica: his eyes are down there!

Oh man, I was all set to go off on newish tertiary character “Heart-throb” for what I thought was a transparently false boast about an obviously impossible YouTube video. But then I checked and learned that kids all over the world post School Fight videos faster than Google can knock ’em down, and of course some of the fights are staged specifically for the videos.

What I’m saying is kids today are terrible, and technology makes everything worse.

Hey, remember when Derek tried to go to a party with his real girlfriend Honey Ballenger and it made Sophie want to get all trained up at military school and flat-out murder everybody? But then Honey got grounded so Sophie dropped the idea and resumed her campaign to stalk/purchase Derek?

“Did you know they have a separate school for aerospace studies?” she coos. It’s her ultimate fantasy, to slip the surly bonds of Spencer Farms and fly, alone and free, into a brand-new life. Well, maybe one little strafing run first.

Hello there, faithful reader! I’m sitting in for Josh through Sunday, May 8 while he wraps up his book tour and recovers from same. Drop me a line at uncle.lumpy@comcast.net if you need any admin help, for example if one of your comments gets hoovered up by the site’s new and voracious spam filter.

I normally only mention the anonymous toilers who add color to the daily strips when they egregiously screw up, so let’s give big props to whoever had the job of dealing with today’s Archie. Not only did they notice the severed foot laying casually atop the debris that Jughead has layered on his floor to block his parents’ access to his room/slaughter chamber, but they chose the perfect off-pink color to represent human flesh that’s just begun to putrefy.

The city of Treetops consists of habitations scattered across the tops of trees, as the name and also just about every Shoe strip published in the last 39 years demonstrate. Rubber comes from trees, and Treetops is inhabited entirely by bird-people. Thus, this is a news item about a rapacious corporation that is going to stop destroying the townsfolk’s homes and will now move on to literally extracting profits from their bodies.

Mark and his fellow cave-captives have spent the last week wandering around this cavern marveling at the miracles of nature that created these gorgeous, enormous crystals. Today they figure they should get a mining corporation in here and make a quick buck. Everybody needs sheetrock! 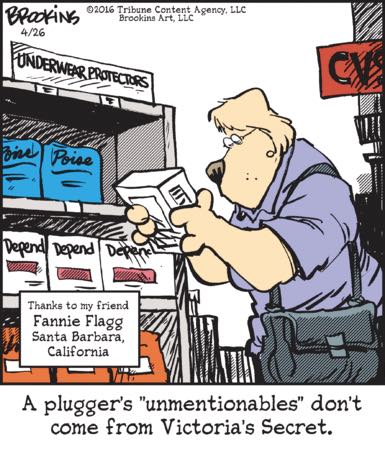 BECAUSE PLUGGERS DON’T DRESS SEXILY, AND ALSO ARE INCONTINENT

IF I HAD TRIED TO COME UP WITH A VICIOUSLY CRUEL PARODY OF PLUGGERS, I NEVER WOULD HAVE COME CLOSE TO THIS