If there’s one thing Marvin likes, it’s poop jokes. But if there are two things Marvin likes, they’re poop jokes and strips based on a theme where you can do a whole series of them that re-use a lot of the same art. I’m assuming we’ll be treated to several more days of Marvin’s Baby Definitions (ha ha, it’s funny that baby is making up his own definition of words, because he’s sassy, and also because in real life babies’ brains are incapable of abstract verbal thought!), all of which will be accompanied by drawings as nonspecific as this. Yes, that Marvin sure is giving the evil eye to his babysitters, or his parents, or maybe one babysitter and one parent, who the hell knows. Is the person on the left supposed to be a teenager, because they’re wearing baggy pants, because of the rap music? Argh, I’m trying to figure out who a Marvin character is supposed to be, let me stop now before I lose my capacity for joy permanently.

UPDATE: Oh God a “baby sitter” is actually a potty-training device and Marvin’s parents are staring at him while he tries to poop on command in the middle of the living room YUCK YUCK YUCK. Thanks a lot, faithful reader Chareth Cutestory, for pointing out that all Marvin strips are about pooping, even the ones that don’t seem to be about pooping at first. 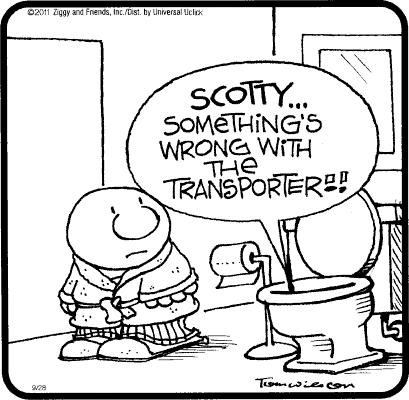 Speaking of poop jokes, one of Ziggy’s poops is quoting Star Trek at him! Or maybe a character from Star Trek has beamed into his toilet? Or maybe he’s undergoing some kind of psychotic break. That seems more likely.