Oh my gosh, you guys, the message-leaving is not going well. 1049, you fool, not 1045! Do “nine” and “five” sound anything alike? No! Well, except for the vowel! But still! You’re a disgrace to your bellhop uniform! Unless you’re not a bellhop at all, but rather a waiter at a Chinese restaurant! Which is just as likely, given the design of that uniform!

Meanwhile, a handsome slab of soccer-playing man-meat just walked up to the desk, missing his love connection by mere seconds. That sure is a sweet team logo Bobby’s got there, if by “logo” you mean “a sheet of paper that he tore in half, wrote ‘New York Blazers’ on, and then safety-pinned to his cardigan.” 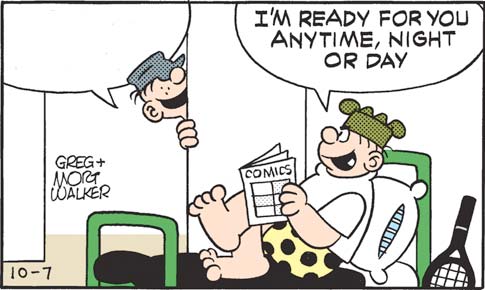 Yay, the weekend is almost here! Why not relax and enjoy it, and celebrate the end of Don’t Ask, Don’t Tell while you’re at it, by coming up with wacky things to put in Beetle’s word balloon here?