Hey everybody! I am back from my undisclosed location and I must say a HUGE thanks to (a) Uncle Lumpy for his hilarious filling in and (b) everyone who donated in the fundraiser! You’ll all be getting personal emails from me this week, and hopefully many of you are already enjoying your bible bird bands. Some excellent photographic evidence of real life bands in the while! Faithful reader Bourbon Babe, Unbuckled notes that her canine companion “Lolly has co-opted it; apparently, she’s planning to go undercover with Andy to figure out the Great Bible Band Mystery.” 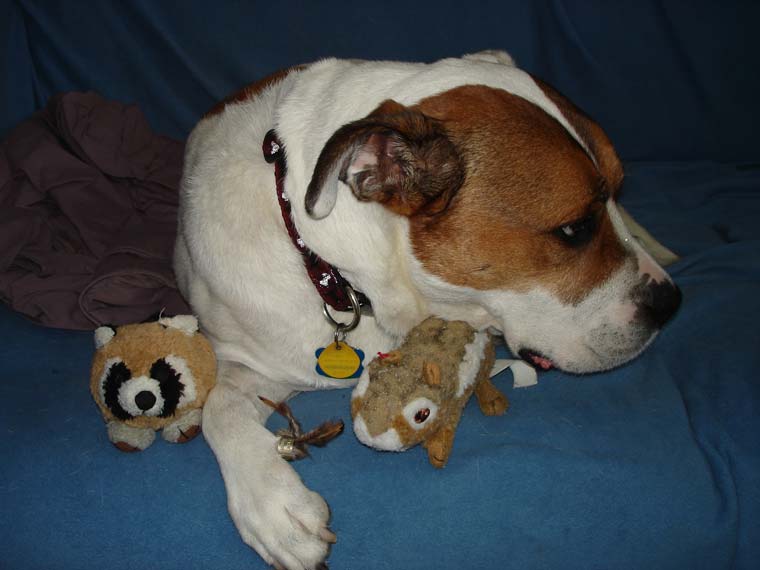 Faithful reader Plastic Fruit added a band to a more appropriate critter. (Sadly, those books on the right are not written by Mark Trail, despite appearances.) 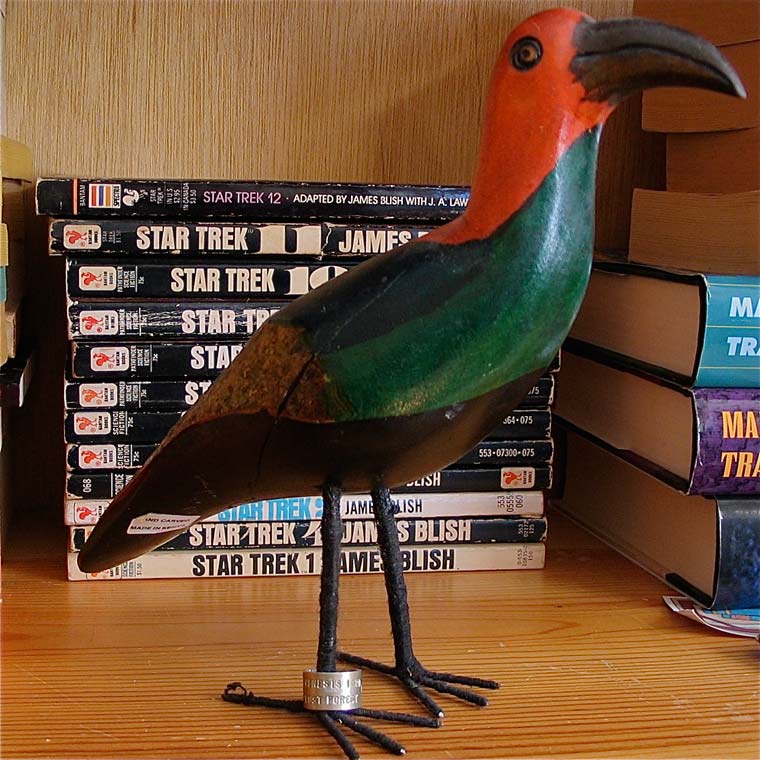 There are still some bands left, so stragglers can still get their hands on them if they want! Just let me know!

And one final note before I present your COTW: The last time we did a fundraising giveaway, with the beloved What Would Margo Do? bracelets, Uncle Lumpy also got first crack at an amazing soap opera strip panel, the great Santa Royale shootout. This time around, I am green with envy that he got first crack at Apartment 3-G’s depiction of high art absurdism: 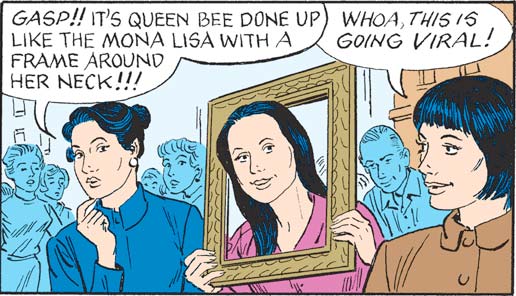 God, I wish I could make things go viral just by shouting “This is going viral!” It’d make my life a lot easier.

Anyway, let’s all enjoy this comment of the week!

“Jughead’s hat … Ah, yes. I’ve seen this before, but I clicked on the link anyway, half afraid it would turn out to be something like an Urban Dictionary term for a horrifically botched circumcision.” –[Old Man] Muffaroo

“Count Weirdly is hard at work inventing a formula that allows people to live forever in utter harmony and bliss. Slylock, observing from an alcove, thinks he may have stolen a Bunsen burner from Reeky the Rat’s meth lab …” –geekwhisperer

Judge Parker — “Key lines in today’s strip: ‘You should try driving it’; ‘Let’s open a bottle of wine’; ‘She’s the world’s best enabler.’ Has MADD heard about this?” –bbofun

“I don’t think the creators of A3G quite have a handle on internet terms. Soon it’ll be ‘This place is Twittering!’ and ‘Look out, it’s getting AOL in here!’ –TheTJ

The Phantom — “You know, when I predicted a lucha libre-based police force, I kind of thought I was joking.” –commodorejohn

Fall 2011 Fundraiser — “What pops up when someone clicks my goose is already personal enough, thank you very much.” –odinthor

“Wow, if I thought Judge Parker was out of touch before, the suggestion that anyone, anywhere has actually read an article in an airline magazine has taken it to dizzying new heights.” –Violet

Curtis — “Yeah, she chased away every woman I was ever interested in. Now I just cut young boys’ hair late at night. Say, you mind if I turn down the lights and put on some Barry White?” –Pozzo

“How does anyone in the Popeye universe know when to find something incongruous?” –Chip Whittle

“So, how do you tell when a Gil Thorp character has a personality disorder?” –Chip Whittle

Pluggers — “You might be a plugger if you’re a dog and you’re wife’s a chicken, but gay marriage makes you uncomfortable.” –Effluvius Erratus

“24 hours Later: ‘This stupid Spidey Tracer must be broken because it’s telling me Spider-Man spent the last 24 Hours doing nothing but watching TV.'” –DaveyK

Tthis is where we’d thank our advertisers — if we had any this week. To find out more about how you could be thanked in this spot, and more about sponsoring this site’s RSS feed, click here.