You guys, I have something to confess. I’ve been slacking. Slacking about Mary Worth. She’s had a fab week and I’ve ignored it, which is violating the sacred bond between my readers and myself. It took a gently prodding letter from a faithful reader, who was concerned that I hadn’t been addressing Mary’s antics and expressed hope that I would maybe do a wrap-up post for the week, that forced me to confront my failure in this area and resolve to do better. As I prepare to leave for my annual tri-city Chrimukkwanzaa voyage, I leave you in Mary’s capable hands until I return in 2012.

What was the high point of Mary’s week? Was it Monday, when her determination to rescue an innocent girl caused her to violently assault a hapless waitress?

Was it Tuesday, when that girl learned that pretty girls get free ice cream? 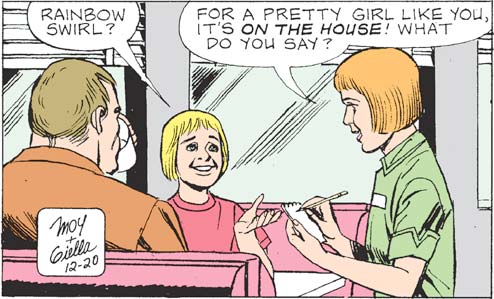 Was it Thursday, when a wide-eyed Mary gesticulated so violently at the 911 operator that her cravat was knocked askew?

Or is it today, when our evil kidnapper subtly asserts his power by placing his body somehow next to and in front of the diner table, proving his ability to ignore the rules of Euclidian space-tieme? 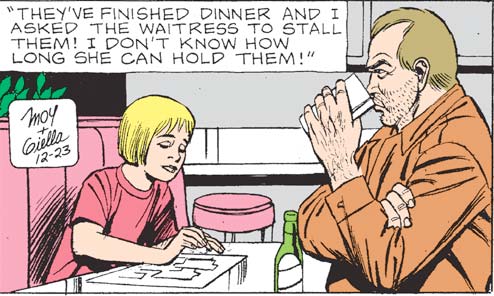 I will see you all again January 3 or thereabouts! In the meantime, please enjoy your comment of the week:

“I’ve put up with art show happenings, Dalai Lama snubs, improbable musical careers, and more twists than a bag of pretzels from A3G but Lu Ann having a ‘sudden flash of insight’? You’ve gone too far this time, Shulock. Too far.” –Ed Dravecky

And the runners up, very funny:

“Uh, Lu Ann, I hate to be a nit-picker, but you acquiesced to his proposal after like one date and a visit to his family who all demanded you marry him. I don’t think knowing you was ever on the menu.” –commodorejohn

“Kelly puts her finger to her head and thinks, ‘Gave it to their native friends? Could it be some kind of tax-dodging money-laundering Bible-bird-band scheme? Jackpot! Quick, Honey, fetch my steno pad!'” –Nate

“I love that gleam in Mark’s eye and his broad smile as he sees the meal that Mother McQueen has prepared. ‘Damn, I wish Cherry could learn how to roast a bear turd like that!'” –seismic-2

“This new plane we developed has a special inability to fly that eludes radar detection.” –sporknpork

“I hope I’m not the only one whose first thought was that when Marvin thought he’d ‘go on Santa’s Facebook page,’ he meant he was planning to take a dump on the computer.” –spence-bob

“This has been Emily Smith’s lucky week. First, a stranger offered her candy if she would take a ride in his car, and now another stranger is offering her ice cream! Dare she press her luck, by asking about pie?” –seismic-2

“To: Walker-Browne Amalgamated Humor Industries LLC. From: Central Intelligence Agency. Classification Level: TOP SECRET. Mission: Produce as much secret military plane-related ‘humor’ as possible. Said strips will be leafleted upon Iran until they give up the captured spy drone in disgust.” –Dagger

“If Ghost Gary truly looks out for his girl Lu Ann, where was he when she almost died from ‘accidentally’ huffing paint fumes a while back? Apparently, he only cares about her life when it involves another guy. Well, at least she’s got a type.” –LogopolisMike

And if you want to learn more about advertising on the site you can go here but really I’m not going to update the site or even really check my email much until after the New Year, so you should really wait until then to do anything about it. See you in 2012 for the apocalypse, suckers!