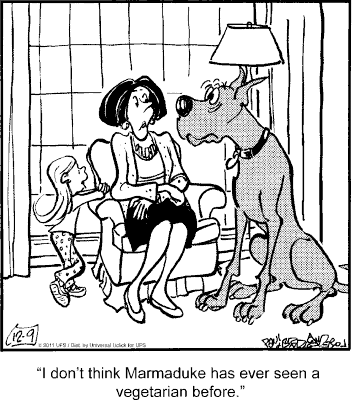 I don’t think the Marmaduke creative team has ever seen a vegetarian before, or at least they haven’t bothered to come up with some kind of visual shorthand to differentiate vegetarians from one of the run-of-the-mill miscellaneous middle-aged humans flummoxed by Marmaduke. Marmaduke’s mind is boggling anyway, presumably at the concept that any living being can feed without something dying in agony.

“It’s just that … Paul’s a creepy, controlling weirdo, and he deserves a passive, empty-headed wife who will do whatever he says and not be unsettled by his demands. I thought I could be that wife! But it turns out that sometimes I have opinions.”

Oh, man, cat, you do not want to get into a shitting contest with Marvin. You’re going to regret the day you ever learned to poop in a box, my friend.