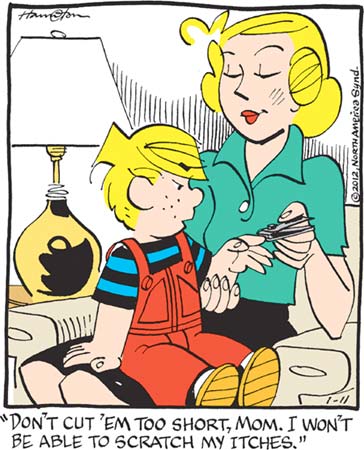 I never thought about itching the same way again after reading about how powerful and little understood a sensation it really is in this New Yorker article, which features, among other anecdotes, a horrifying account of a woman who had an unstoppable itch on her scalp that was so bad that she ended up scratching right through her skull. My point is that cutting your fingernails short enough that you won’t be able to scratch itches in a satisfying fashion is a 100 percent legitimate concern, and there’s nothing either menacing or cute about Dennis’s request, although maybe Alice’s smirk is supposed to indicate that she plans to do exactly this, as a subtle form of revenge for, well, pretty much everything Dennis has done since learning to walk.

Are you tired of me talking about Gil Thorp yet? Well, too bad, because this is the first storyline that I’ve genuinely loved in years, so you’re just going to have to sit there and take it. For today’s strip, I’d like to point out that (a) most teenagers who want the new Twilight movie “for their girlfriend” (who “lives in Canada,” probably) are almost certainly capable of finding bootleg movies on the Internet, obviating the need to go offer some improbable story to a sketchy Kiwi tattoo artist, and (b) a vision of Batman t-shirt teen alternately crying and masturbating to the latest Twilight film jumped into my head unbidden upon reading the final panel.