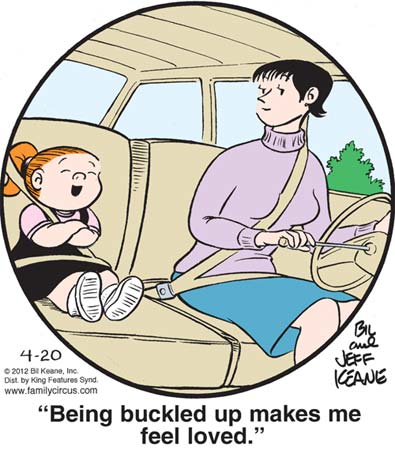 Aww, isn’t that sweet? Ma Keane can’t stand physical contact with Dolly, for obvious reasons, but instead of just letting her wither and die without affectionate touch, she’s convinced her that the seatbelts are some kind of wire mother. The car will hug you even though Mommy can’t, Dolly!

Most repurposed car cartoons from the ’60s and ’70s, of which this Family Circus is almost certainly one, feature seatbelts that were pretty obviously drawn in later (i.e., they attach to nothing in particular at the ceiling, they tuck weirdly under characters’ turtlenecks, etc.) in order to make Americans forget about the glorious former age when gas was 50 cents a gallon and cars were gorgeously designed high-powered death traps and we didn’t care whether we or our children lived or died. Still, it’s kind of weird to take an altered cartoon like this and make it actually about seatbelts. One wonders what the original caption was. “I almost broke through the windshield that time, Mommy! Next time slam on the brakes a little harder!”

Aw, not only do Randy and April get wealth and power without any effort or merit, but they also get true love, the kind that ordinary people like you will never experience! I’m intrigued/disgusted by April’s claim that she wanted to marry Randy from the day she met him, which seems to lend credence to the idea that she’s a CIA superagent detailed to protect him at all costs, because really, who’d fall in love at first sight with Randy, gross. The earliest example of Randy-April romance I could find in my archives is from six and a half years and two artists ago; I don’t think it’s supposed to be the day they met, but it’s instructive nonetheless, as it features skilled marksperson/all-around badass April feigning incompetence, because that’s what boys like; later, Randy makes a crude sexual demand.