One of the things I think is funny and interesting in B.C. (is it on purpose? let’s say it’s funny and interesting on purpose) is its mix of sentient predator and sentient prey animals, actually depicted preying on each other, as with the ants and anteaters. I find today’s strip particularly intriguing on this score. If you don’t really think about it much and accept the outside-the-anthill perspective the strip gives you, it’s a silly bit about an anteater getting his tongue tied in a knot, ho ho! But take a minute to imagine the scene inside: the gathering of innocent ants, going about their business within the larger colony, when suddenly an enormous, slimy tentacle bursts through the wall of their home, slithering to and fro. Who knows how many hundreds of unfortunates were snared by foul mucus that covers the monstrous thing and dragged back screaming into its snout, where they will be digested, alive, in agony? The carnage continues until one heroic young ant defeats the beast using the skills he’s learned in his scout group; the monster retreats in confusion, but the colony members look around their shattered home, weeping for their loved ones, wondering how they’ll be able to put their lives back together.

“Well, we flew close to him and tipped over his canoe and probably he fell into a fairly calm river within easy swimming distance of shore. That should take care of Mr. Trail!” Bush pilot Mike Harris is the most half-assed murderer ever. Maybe someone should check in on Al Chavez, he might turn out to not be dead after all. 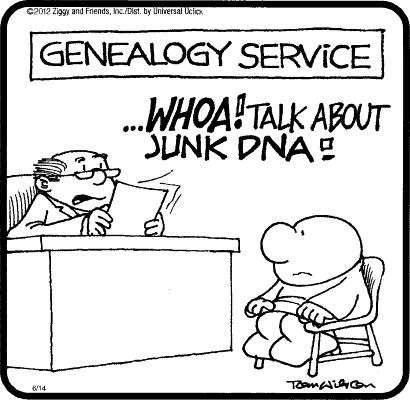 Finally, Ziggy has been proven to be genetically inferior, with science.