In a truly great Mary Worth storyline — of which I now officially deem this one — you can’t predict the ending from the opening days’ plots. Who would have guessed that, back when Dawn was moping around on the couch watching TV because some dumb boy dumped her, we’d eventually see her and her father clinging to a pole on a listing cruise ship, people in the background hurling themselves into the sea, as Wilbur makes peace with his impending death? The question now is whether Mary Worth actually intends to kill off the elder Weston. Usually such Very Special Deaths are meted out to particularly beloved characters, so as to pull at the heartstrings of readers; and while I love the Wilbs (so much so that I’ve given him a secret mental nickname, “the Wilbs”), my affection for everything Mary Worth is so far down a weird hole of pomo irony that I can’t guarantee that it’s a reflection of emotions held by normal humans. Still, I will be unironically sad if Wilbur dies. Don’t despair, Wilbur, you can do it! 100 yards is really not that far to swim! The Mediterranean is warm and pleasant this time of year! There are so many delicious panini on that island! HAVE FAITH IN YOURSELF! 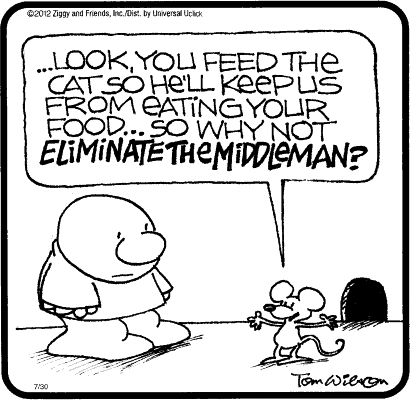 A few years ago, we had a minor mouse problem and our cat was completely useless in dealing with it, a fact that became clear when she walked into my office with a tiny mouse in her mouth, dropped it on the floor, and watched it run off. “Bye, friend!” she was probably saying. “I hope we can play together again tomorrow!” Later I figured out that the mice were actually being drawn to her bags of cat food, which I stored on our back porch, and as soon as I started putting those in a rubber bin, the mice vanished. So not only was she not getting rid of mice, but she was indirectly responsible for their presence in the first place. What I’m trying to say is that maybe you should listen to the bipedal talking rodent, Ziggy, he’s making a certain amount of sense. 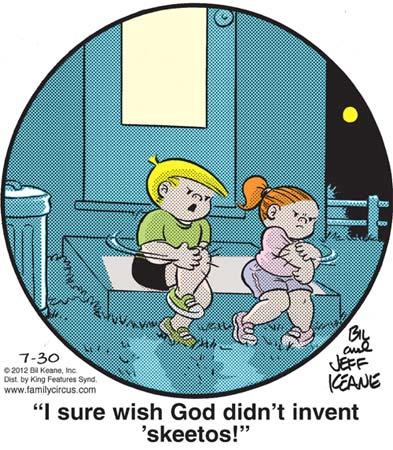 Nice try, Billy, but your adorable malapropism can hardly hide the fact that you are angrily raging against the majesty of God’s creation and directly questioning His omnibenevolence. A few hours in the Keane Kompound hot box will hopefully save you from an eternity in hellfire later!