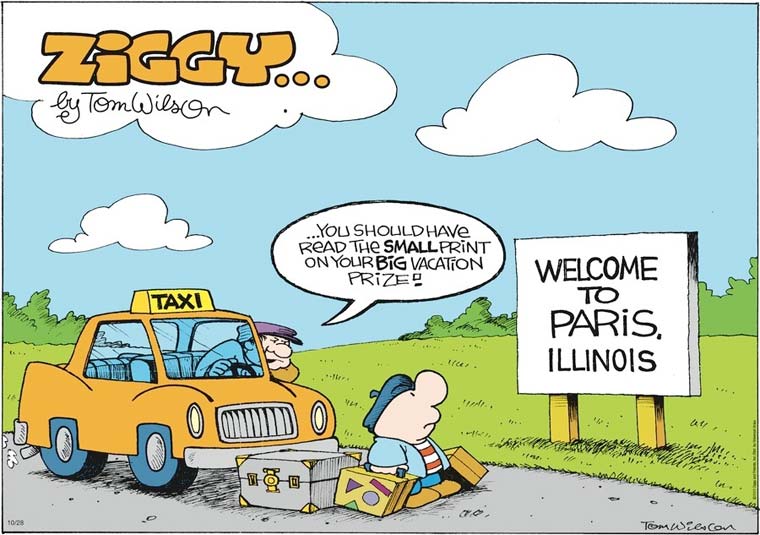 So I was reading today’s Ziggy and enjoying the little movie I made in my head about what led up to this. (Making up cruel, elaborate backstories about Ziggy’s suffering is the main reason people read Ziggy, yes?) So, yes, Ziggy won a trip to “Paris” (presumably from his local travel agency where people are mean to him all the time), and didn’t read the fine print, and then put on a beret to get on the plane to University of Illinois Willard Airport (the closest with regular commercial service to Paris, Illinois, as everybody knows), then got into a cab at this airport, with the cabbie presumably being in on the joke somehow (maybe the cruel travel agent arranged for him to pick up Ziggy in advance?), and then the cabbie just dumped Ziggy and his luggage in the middle of the road at the Paris, Illinois city limits. That last part is my favorite. Like, I’m assuming that as part of this elaborate dumb prank Ziggy actually was given a hotel room, maybe at the Super 8, but no, instead of driving him there, the cabbie decided that the sign with “Illinois” on it was the perfect place to for Ziggy to finally have his horrible realization that once again something he thought might be good in his life is only another opportunity for humiliation. Enjoy your time in Paris, Illinois, Ziggy! Enjoy walking to the Super 8 from wherever it is you are! It’s at the intersection of Highway 150 and Highway 1, FYI.

I find this strip fairly unbelievable. If we know one thing about Francis, it’s that his friends are drunken good-time ne’er-do-wells. Why would he be going to a Halloween party where everyone has the same unimaginative costume and people get upset at the mere mention of alcohol? I think he may have accidentally fallen in with a cult. 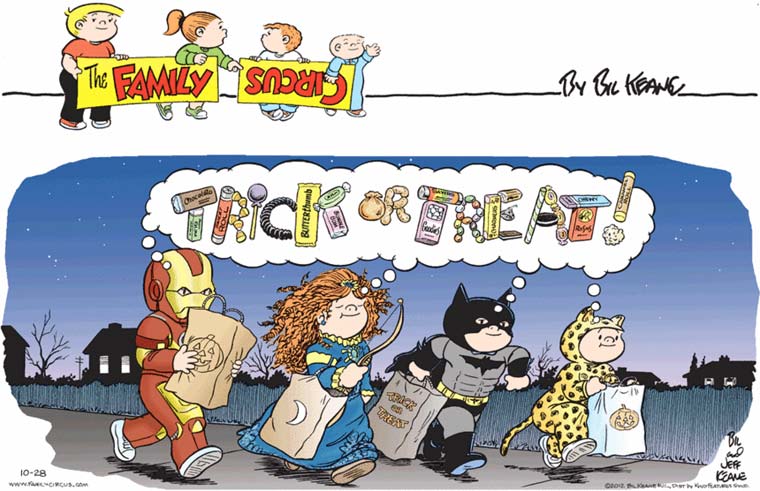