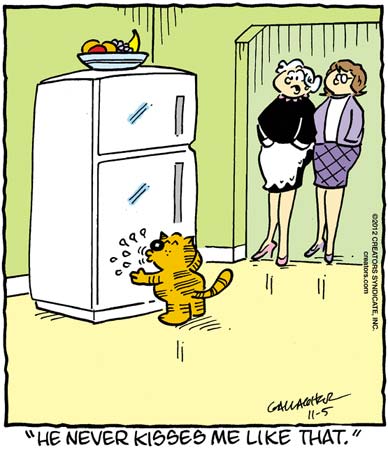 So I’m still trying to get my bearings on Heathcliff? Heathcliff and Marmaduke have different syndicates, but they seem in some ways to be one-panel animal companions — indeed, both have Sunday features (“Kitty Korner” and “Dog Gone Funny,” respectively) where people can write in with very mildly amusing stories about their pets that never seem to involve urine or vomit, unlike most of the pet stories people tell me. Nevertheless, Heathcliff is not a Marmadukean soul-destroying hell-monster, but rather a mid-level thug who lives a self-satisfied and comfortable existence occasionally interrupted (but also at the same time sustained?) by dealing out violence to those who irritate him. Today, though, we see that he’s a lover as well as a fighter, and indeed his erotic life is much stranger than his sadly predictable acts of aggression. While our focus in this panel is rightly on the cat that’s tongue-kissing a kitchen appliance, we should also spare a thought for the human woman who regards this sordid little scene and reacts not with disgust or bafflement but instead with a sort of wistful jealousy.

Oh no … the heavy-lidded grin … the admission that he’s had time to prepare a response on this topic … the opportunity to set the record straight on the importance of sequential art as a means of serious expression … WE ARE APPROACHING FUNKY WINKERBEAN SMUG LEVEL ALPHA, REPEAT, SMUG LEVEL ALPHA … TAKE SHELTER WHERE AVAILABLE … MAY GOD HAVE MERCY ON YOUR SOULS