Your COTW coming in a moment, but first … have you ever dreamed of hearing my voice making jokes on some sort of broadcast for your iPod? Well, I was a guest on not one but two podcasts released this week! First: did you know that back in the ’70s and ’80s, there was a Star Wars newspaper comic strip, not unlike the late lamented Spider-Man newspaper comic strip? Trust me, there was, and it was amazing, and I discussed one storyline on the Marvel Star Wars Explorers podcast. If you’ve spent the years being subject to all my comics opinions thinking to yourself, “Gee, I wonder if Josh has Star Wars opinions as well,” this is your chance to find out!

I also got to be a guest on the delightful MeatCast, a podcast dedicated to our favorite non-lasagna-focused orange comics cat, Heathcliff. Download this week’s episode from Apple or Spotify to hear me emerge semi-triumphant on the HeathQuiz, and also discuss serious questions like why Heathcliff is nude all the time and where he was on 1/6/21.

And now, let’s move on to your comment … of the week!

“Though her face was the picture of innocent contentment, inwardly Dolly raged: ‘Foolish crone!’ she thought, ‘Does she think I offer my loyalty willy nilly? Are the billions daily served as nothing to her? Is she blind to those gleaming, golden arches through which the tired, the poor, the huddled masses yearning to breathe free, the wretched refuse of the teeming shore may pass to bliss and plenty? Truly, there is but one true Founding Father, and his name is Ray Kroc. This isn’t just America: This is McDonald’s America! I am bound to honor my elders, but one day, one not so distant day, Grandma will go the way of last month’s Happy Meal toys, and believe me, I’ll be lovin’ it. Ba da ba ba ba.’” –Urlance Woolsbane

“Henry could listen to spoken directions from his GPS, just like virtually everyone else in the world. But he keeps it in his pocket on ‘vibrate,’ due to a weird sex game he’s playing with his very hot, very bored wife.” –BigTed

“Today’s Shoe asks ‘What would Boris Johnson look like if he was a bird? And also he committed a series of crimes so severe he got 68 years in jail?’” –Schroduck

“I’m almost certain that the last panel is Billy just giving up on learning to read and instead just imagining a chaotic mix of characters and events as he stares blankly into the pages. He’s lucky: Jeffy doesn’t have the mental capacity to do even that.” –pugfuggly

“I can almost hear the teacher gasp in pain with every word, as her entire waistline has somehow been squeezed into a small dog collar she’s using for a belt. ‘Learn How to Read Before I Pass Out,’ is what the sign should say. Or maybe ‘Somebody Call 911.'” –made of wince

“‘Do I vape? I’ve got at least two Vapes in my deck here. Three red, two black mana, does 4 damage but double that to air-types, but if I use it, I might get the addicted status which means if I don’t keep playing it, I start taking damage. I mean, it’s a dangerous card, but not as dangerous as actually vaping.’ –Lines from Vaping Madness, a short-lived PSA that aired on Local 58.” –Voshkod

“Might as well strangle her with your bowtie, Art. That is hilariously not a real gun.” –jroggs

“Dr. Ed will soon learn that the Pomeranian he failed to help was actually a social media star with millions of followers on TikTok. Dr. Ed can handle his malpractice insurance being canceled again, but he’s not ready to be canceled by social media.” –Philip

“The conversation really grinds to a halt when the Doc’s plate of severed fingers arrives.” –Hibbleton

“It really doesn’t matter how that guy’s name is spelled or pronounced, because at some point he’s going to join a rival gang. He’ll be Kryptonite, Blood tomorrow.” –Dave in Pittsburgh

“That is the proud stride of a man who knows he is the great genius, Art Dekko.” –Dan

“In a giant step for women’s rights, thirty years ago Blondie was given a job outside the house! Today another giant step: she is given a new facial expression!” –Ettorre

“My cat named Odin is pretty laid-back, my cat and dog get along with everyone, didn’t have polyamory on my Mary Worth bingo card but here we go I guess.” –Stop Motion Cyclops

“Well, if you wanna get laid-backed, Dr. Ed, there have got to be better ways to do it than drinking 6 ounces of vodka, neat, from a wine glass. Like tranquilizers! Surely you’ve got some ketamine back at the office, no?” –Effluvius Erratus

“They accidentally printed the unseen ‘missing panel’ of every Crock installment ever.” –Just John

“OK, Grandma, here’s your cue to start waxing nostalgic over the ‘good old days.’ Tell Dolly how a Big Mac cost 55¢ when they first came out. Don’t mention that minimum wage was only $1.25 an hour.” –Guillermo el chiclero

“Mr. Wilson has internalized Dennis’s menace to the extent that it rules his life even when Dennis is nowhere to be seen. This is the highest level of menace. I think that’s from Foucault.” –matt w

It’s devastating when a relationship you thought was heartfelt turns out to be transactional, especially when it’s with your own child. Dennis the Menace could take master classes from this little fucker.

Gil waves off an impending homicide. A man’s gotta commit to be this half-assed. 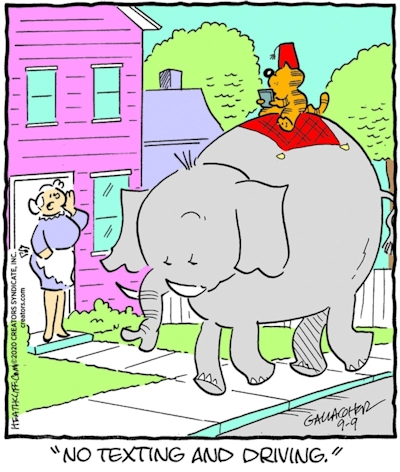 The red crystal “attracts love,” for dumping in the fish tank. The blue one “emits peace,” for throwing at Luann.

I always feel better after my obligatory Luann post; it’s like walking out of the dentist’s office.

It’s the last day of the Comics Curmudgeon! Summer 2018 Fundraiser — Give now! Hurry! Thank you!

Blondie and Dagwood are such experienced kissers they can carry on entire conversations with their lips locked. 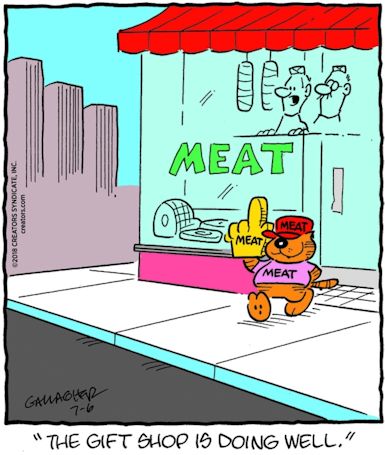 The chicken’s involved, the pig’s committed, and the cat’s a fan.

The middle-schoolers of Luann now dress as adults but carry on the same rituals, including playground weddings. 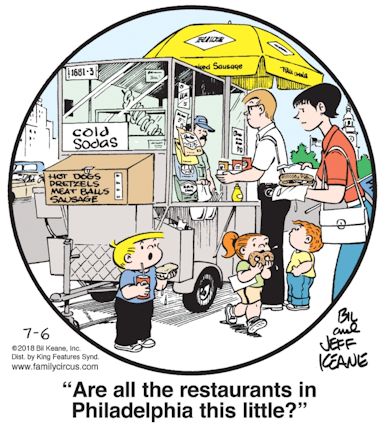 Psst, Walt — ask for the dollar in quarters; you’ll be half a buck ahead and no bending.