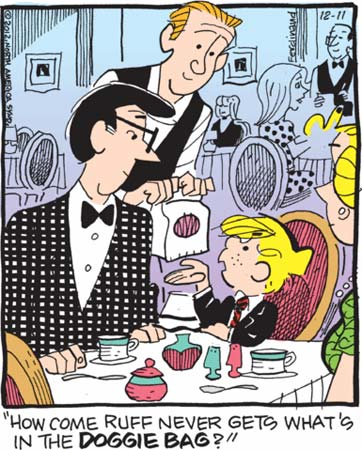 One of Dennis’s core menacing shticks is repeating things he doesn’t fully understand in a way that causes embarrassment to his parents, usually because it’s something insulting they’ve said about someone behind their backs. Unfortunately, Dennis has now become a self-aware menace, and he now knows that he can get a rise out of people this way; but since the whole thing revolves around him not knowing the meaning of the things he’s saying, he’s sort of blundering around in the dark, latching onto phrases he’s not familiar with in the hopes that someone will be humiliated when he spouts them off. “So it’s a doggie bag, but it’s not for the dog, right? Eh? Eh? I’m saying what everyone’s thinking? Is anyone in trouble yet?” 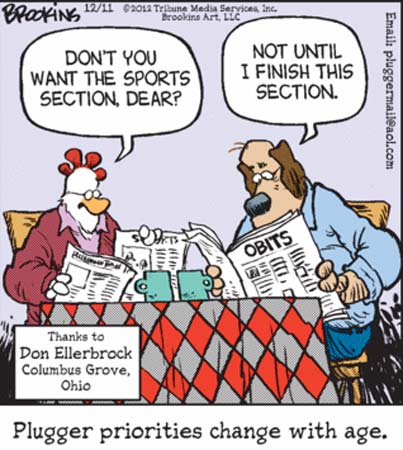 The games whose outcomes were so important to pluggers in their youth — grown men, scrambling around in the dirt after a ball! — seem meaningless now. Pluggers know that there’s only one game left in town: survival. They don’t care how many pills they have to choke down, how agonizing it is to carry their creaking frame from chair to chair; the biological imperative carries a thrill all its own. Those names and faces in the obits section belong to family and friends, some of them very dearly missed, and yet in a real sense, just being alive to see the pictures and read the pocket biographies is a victory.