Hey, it’s Doris, Margo/the Mills Gallery’s mousy assistant who married some guy who I think might have originally been presented as a love interest for Margo or maybe Lu Ann, who can even remember now. Anyway, Doris must not really be up on “current events” or whatever if she can’t recognize the governor standing right in front of her or notice what I’m sure is his sizable security entourage lurking around outside. Then again, you can forgive her for being confused, seeing as he looks just like all other dark-haired Apartment 3-G dudes, including her husband. 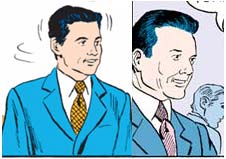 “Can I tell her who’s calling? Can anyone? Can anyone explain what’s going on? You all look alike to me! Jack? Jack, is that you?”

Momma is politically and culturally retrograde in any number of unsettling ways, but give the strip credit for this: the title character is just as intent on policing her son’s sexuality as she is on policing her daughter’s, if not more so. And, you know, I’m all for casual sex, but I might start getting testy too if I had a kid who called up a bunch of people in rapid succession to find out if they’re DTF tonight while I’m right there in the room with him.