You know, sometimes the tropes built into a strip’s visual aesthetic become so all-pervasive that probably the artists don’t even think about their meaning anymore. For instance: almost all the clothes worn by the denizens of Hootin’ Holler sport visible patches; the community is isolated from the worldwide trading networks that bring incredibly cheap third-world produced clothes to the United States, so the town’s inhabitants must thriftily keep the garments they do have wearable long after a flatlander would have simply thrown them away. But I think we’re meant to believe that this shirt Clovis is wearing is new, and is the sort of “shirt-with-a-logo-on-it” that fancy city folk wear, much to Snuffy’s confusion. Yet even this shirt is already patched at the elbows! Perhaps “Life Is Bodacious” was a slogan that never caught on in the world outside Hootin’ Holler, and now all these shirts, ratty from years sitting in a warehouse somewhere, have been dumped at Silas’s general store, like the “SAN FRANCISCO 49ERS SUPER BOWL XLVII CHAMPIONS” hats being worn by unsuspecting people across Latin America and Africa?

(Confidential to Barney Google and Snuffy Smith: I probably wouldn’t have spent so much time thinking about this if there had been an actual joke in today’s strip? Like, if Clovis’s shirt had spelled out something different that was still a word with the suspenders blocking part of the writing. Something different and funny! Just a suggestion.)

As usual, there’s an adventure happening in the Phantom that I haven’t really been keeping you up to date with. But I thought today’s strip was kind of poignant. How did the adorable young nerd in panel two, wearing a bow tie out in public and eating an ice cream cone, grow up to become the tough drug dealer in panel one, with his tank top and hoop earring and bicep-wrapping tattoo? It’s almost as if a law enforcement system based on vague fears of an immortal ghost who lurks in the jungle isn’t particularly effective in getting at the root causes of crime. 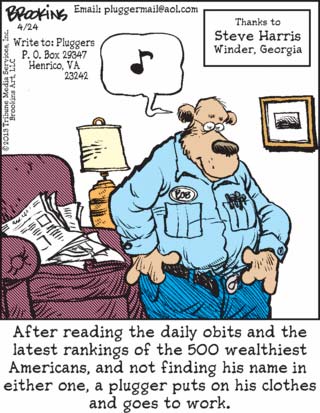 Wait, is this plugger just now putting his pants on, right here in the middle of the living room? Was he sitting in that recliner spanking it to the obituaries? Pluggers you disgust me beyond my ability to describe