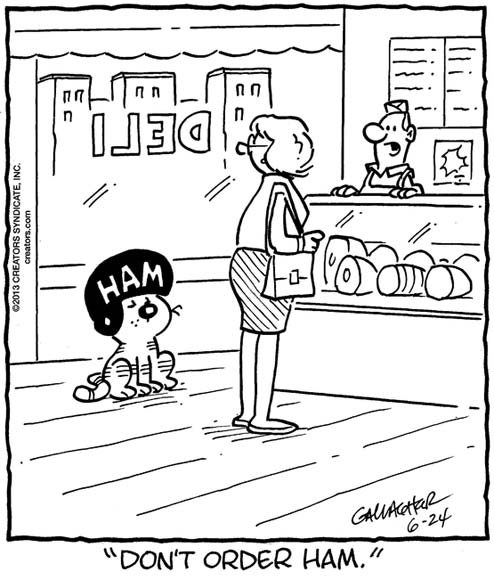 It appears that Heathcliff has entered its Large Labels In Block Lettering phase, to the delight/confusion of comics fans everywhere. The first entry in the genre, in which Heathcliff pledged allegiance to cake, was at least straightforward: Heathcliff really liked cake, you see, and wanted to let people know, in flag form. Today we move further into avante-garde territory. Heathcliff, who is not in a context where he might be expected to play football, is wearing a football helmet, which has “HAM” written across the front of it in very large visible type. Is this meant to indicate, in a somewhat on-the-nose fashion, that he is on “Team Ham,” in terms of the eternal rivalry for esteem among the various meat products? If so, why does our flesh merchant advise his customer against purchasing ham? Is he irritated by Heathcliff’s endless ham cheerleading, and is being contrary out of spite? Or is Heathcliff wearing a helmet not just symbolically, but because he intends to instigate real violence, of the sort that might result in a head injury, to anyone who attempts to take any of the precious, precious ham out of the butcher’s shop?

Oops, sorry everybody, Spider-Man’s exciting rescue mission to Central America is on hold! Don’t worry, even more spine-chilling thrills are on the way: Spider-Man waits on hold with his credit card company for 45 minutes, Spider-Man has a petulant argument with the hotel management about their security procedures, Spider-Man stands in line to get a rush replacement for his passport and has to make awkward small talk with the guy next to him who’s hinting with increasing lack of subtlety that his upcoming trip to Thailand is for sex tourism, etc.