So vultures are creepy because we associate them with death, right? Like, they only show up when someone or something is dying, and then they feast on its corpse. We find this horrifying and repugnant! So wouldn’t it be even more horrifying and repugnant if the vulture actually killed a living being in order to leave it in a state that the vulture found palatable to eat? Possibly by using a weapon of some sort it designed specifically for that purpose? How gruesome! That was probably the thinking behind the joke in this strip, and then whoever came up with that joke probably went somewhere and enjoyed a sandwich filled with meat sliced from an animal that wasn’t alive, how could you think about eating a living animal, that’s disgusting.

Speaking of the awful stench of death, it’s a good thing I can’t tell the barely distinguishable cavemen of B.C. apart, because otherwise I might feel more of an emotional attachment to whoever it is who’s suffering a slow, agonizing death from exposure in the first panel. 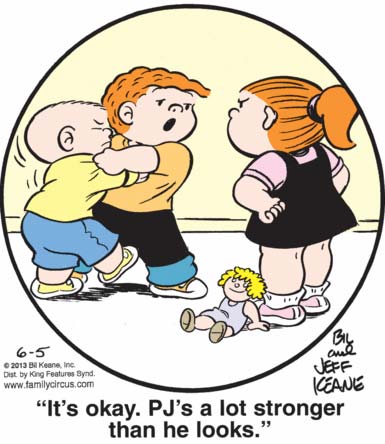 At last, PJ’s training is complete! Soon he’ll face off against other competitors in the 25-to-35-pound weight division in … THE BABY OCTOGON.