Greetings, faithful readers! Your comment of the week in a moment, but first a brief reminder that open talk warning shirts are available for purchase at my CafePress store. Here we see faithful reader/genius A-wel Cruiz, who designed the logo, modeling his own attractive work: 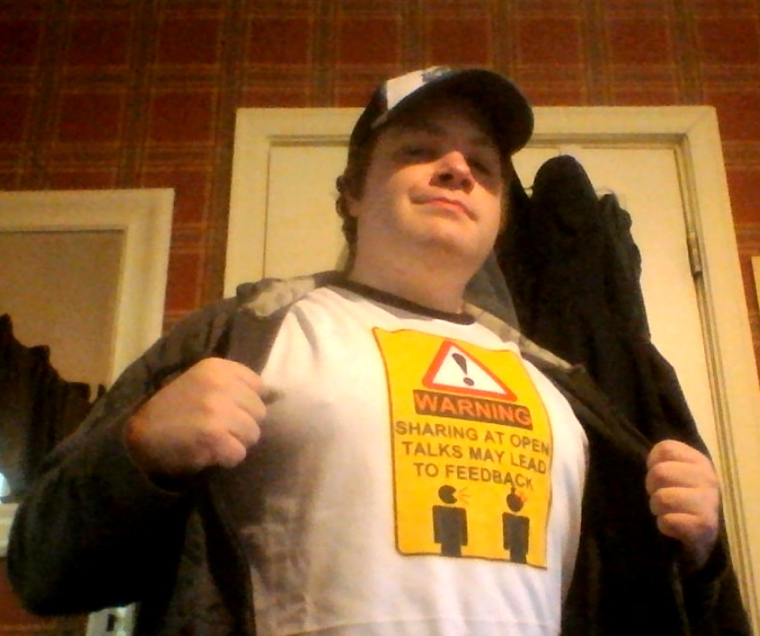 So what are you waiting for? Go forth and purchase!

Also, go forth and enjoy this fine comment of the week:

“Is that really what Jeff looks like? Mary’s been ignoring him so long I think she’s starting to forget. ‘Let’s see … Frank Sinatra eyes, Mitt Romney hair, John Goodman chin … did he have a neck? Probably, but I won’t include it in my vision until I check the photos.'” –pugfuggly

And the enjoy these runners up!

“Pluggers continues the series of strips in which the dog has usurped the man’s place in the woman’s heart, yet the man is also a dog married inexplicably to a chicken woman (perhaps the one from The Kids in the Hall?). My theory that the comics page reflects the true reality we refuse to see in order to protect our sanity (the horrors revealed by 9CL, Slylock, Luann and Pluggers) seems more and more rational. At night, I now dream of the lost glistening city and hear the chanting of eldritch frog people (again, the men in 9CL certainly share a batrachian quality). I fear I may not survive to post again. Tekeli-li! Tekeli-li!” –Everything Is Better with Monkeys

“Great use of that owl, making direct eye contact with the reader. ‘WHO can prevent the animal uprising? Only you.'” –Joe Blevins

“Note there is a time skip between the penultimate and last panel, so we don’t know quite how far he took the analogy. I’m guessing ‘slaughtered like pigs’ came in at some point, and perhaps ‘boiled down for glue.'” –Danel

“Man, I hate Mond… what? Are you serious? Miss Buxley’s just gonna steal my Mondays riff? I COOKED A DAMN LASAGNA FOR THIS.” –Dan

“This is the freshest air I’ve breathed in a long time! And, hey, look at that bobcat about to kill that white rabbit I brought with me and just released into the wild. That’s what I really came here to see: bloodshed! Not that pansy-ass arguing they call ‘bloodshed’ in Washington. I want to see a living thing be torn apart just for my amusement. Well. Say, Dusty, have you ever read a story called ‘The Most Dangerous Game’?” –Christopher

“Meanwhile, Pac-Man watches Heathcliff’s travails from within his giant obsidian cloud-ship. He laughs bitterly at the follies of man. Or cat, or ape, or whatever this comic strip is about, I don’t even know.” –C. Sandy Cyst

“Senator, meet Dusty Rhodes, and his fellow rangers Jimmy ‘Superfly’ Snuka and George ‘The Animal’ Steele. They’d like to have a discussion with you about your policies. Oh, look! A vicious bobcat! You’d better get in this protective steel cage with the rangers!” –aphthakid

“Y’see, there are cult classics, such as Rocky Horror, The Room, Battle Beyond the Stars, and Garbage Ape. They became cult classics because their humor was unintentional. They were chosen for veneration by the fans. Then there are pandering attempts to court the midnight movie audience (Can’t Stop the Music, The Worst Movie Ever Made!, Trash Chimp), and the results can be smelled a mile away. Basically, I’m saying: Don’t screw this up for me, Heathcliff.” –The Mighty Untrained FOOZLE

“I’m jest one gimpy leg from the glue factory! Also, Snuffy fucks me! So yeah, the horse comparison is pretty solid.” –Doctor Handsome

“Don’t try to figure out what’s happening, Mark. It makes no sense to us, either. Just stick to your strengths: bide your time until someone admits being evil and points a gun at you, then beat them savagely. You might as well go punch the oil rigs as try to make sense of American energy politics. If you actually try to influence the legislative process, you’ll probably end up with the Keystone XL Pipeline running through Cherry’s kitchen.” –Master Softheart

“Note how Marvin and friend are looking back on a past event so traumatic that only now, these many months later, can they bring themselves to speak of it openly. It’s not enough that the strip continues to mine rich veins of unpleasantness unfit for the comics page. No, it must also tease us with the suggestion of long-repressed memories that will now come spewing forth from Marvin’s subconscious, very much like a tsunami of regurgitated processed-meat products, until we long for that simpler time when all we had to worry about were poopy-diaper jokes. ‘We didn’t know how good we had it,’ we’ll say. Well played, Marvin. Well played.” –Dr. Moreau

“I like the way the pizza makers are now completely bored with Heathcliff. It’s like, ‘Yeah, the talking cat came in, we got the birds, we baked the pizza and now we’re just so totally over the whole thing.'” –Lily Sincere

“4-20 blackbirds? Finally, a clue to the inspiration behind Heathcliff.” –zaratustra

“‘It’s sort of like how we shed flakes of dead skin, except we do it constantly. Trees only do it when they’re about to go into their winter hibernation. We’re shedding flakes of dead skin all the time. That’s what all the dust all over our house is made of. You know what’s really cool? Little tiny dust mites all over the place eat up all that dead skin. And then they turn it into a totally different kind of dust by shitting it all over the place. You know where you find the biggest concentration of dust mites? Mattresses. When you go to sleep at night you’re sleeping with billions and billions of mites eating your dead skin and shitting all over you.’ And thus Dolly plants the seeds for Jeffy’s obsessive compulsive disorder.” –Christopher

“Today’s Rex Morgan is quite sad. I know that most human unicorns face a lot of mockery and pain in their lives, but they need to overcome this, see themselves for the wonders that they are! Not seek out some shadowy doctor who’s willing to run a back-street hornectomy. Face it, Buck, even without the horn, the trail of glitter you leave behind and your creepy attraction to virgins is going to make it clear what you really are.” –Voshkod

Thanks to everyone who put some scratch in my tip jar! And as always, we must give thanks to our advertiser, who has sponsored the mobile version of the site this week:

To find out more about how you could be thanked in this spot, and more about sponsoring this site’s mobile version or RSS feed, click here.