Guys, I need to apologize for having not at all covered the current Rex Morgan storyline, which if I had to guess will probably play out as “Sometimes Men Are Also Victims Of Domestic Violence, Like This Guy Rex Went To High School With Whose Wife Tried To Kill Him By ‘Accidentally’ Shooting Him In The Head With A Nail Gun, And Also General Practitioners Are On The Front Line In Spotting Possible Warning Signs Of Abuse.” But of course I couldn’t pass over Rex’s fantastic facial expression in panel three, which is much less “Hmm, wonder how this’ll play out, trying to limit the victim’s social life is a classic abuser move” and more “Ugh, why do they always think we’re friends just because I talk to them in a professional context, I knew I should’ve been a forensic pathologist, you get plenty of peace and quiet down in the morgue.”

Ugh, Mary Worth, can we get a little less Mary and Wilbur blah blah blahing about advice column writing and a little more badass meth dealer action? You’ve only got a few days to latch onto all the hardcore meth storyline addicts who have been left without a narrative supplier now that Breaking Bad is off the air, and you’re blowing it.

Meanwhile, Dr. Jeff had better brace himself, because now that Mary’s number one priority has been taken over by Wilbur, he’s been bumped back up to number four. Will he be able to handle the attention? 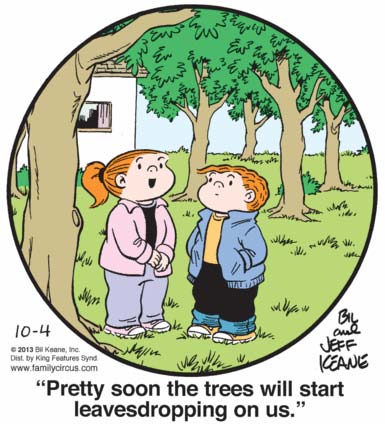 The fact that omnipresent government surveillance has become such a natural part of our lives that even children joke about it is almost worse than this terrible, terrible bit of wordplay. Almost.