Mary Worth is being mugged in broad daylight in the middle of Central Park (THANKS A LOT DE BLASIO) and things probably aren’t going to end well … for the mugger. Mary starts off by shouting for help, to be polite, but by panel two her face suddenly bears a striking resemblance to movie tough guy Claude Akins, or perhaps to a majestic lowland gorilla; this transformation, combined with her outfit’s similarity to a karate gi, implies an imminent savage beatdown that our petty criminal won’t soon forget.

If you ever need proof that Francis isn’t just a loathsome layabout, but a loathsome hipster layabout, look no further than his sports fandom. Following Ivy League football when you don’t actually attend an Ivy League school makes all those European soccer nerds who smugly tell you about how they illegally stream Bundesliga games online in the wee hours of the morning look like amateurs. And the Ivies are actually among the more normal pennants on display here! “Oh, your favorite team is Ohio State, huh?” he says. “Mine is NYU. They played their last collegiate football game in 1953. You’ve probably never heard of them.” 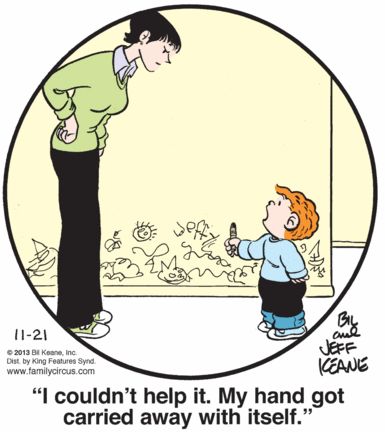 This is also what Jeffy will someday tell the cops when they finally arrest him for that string of brutal stab-murders.