I mean … yes, he is? Everyone saw him? J. Jonah Jameson, you old rascal, I think you’ve finally found away to defeat Spider-Man: by just asking absurd counterfactual questions whenever anyone defends him. “In case you didn’t notice, there hasn’t been anyone reporting that their children have been kidnapped, so Spider-Man is innocent of your charge that he’s eaten thousands of New York City babies!” “But is he, Robbie? Is he??” 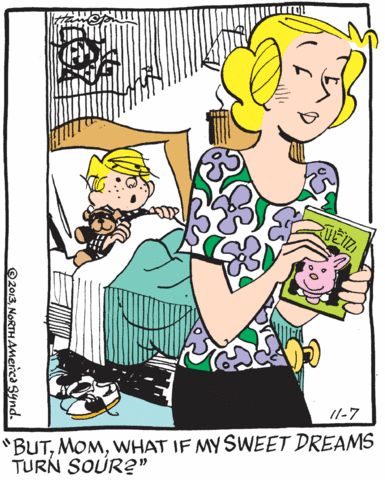 Dennis’s mounting anxiety over his future dreamscape combines with his mother’s crafty expression to make this panel one of the most chilling things I’ve seen today. We can never know exactly what she said to him during storytime tonight, but we now know that Alice wears the Mitchell family menacing crown.

Here is a brief unpaid, unsolicited endorsement: Conor Lastowka, who writes for Rifftrax and co-curates the [Citation Needed] Tumblr with me and is generally hilarious, has, (unlike certain [Citation Needed] Tumblr co-curators who are still wrangling with book-length prose) finished a novel! It’s called Gone Whalin’ is about whaling, and time travel, and other exciting topics. You can check out the webpage or download the first three chapters or watch the book trailer or just buy it already!