Like many Vikings, Hagar typically returns from his missions of plunder in the more civilized parts of Europe to his simple thatch-roofed house in Scandinavia. But now it appears that, just as Rurik led his followers to settle permanently in Russia and Rollo led his to Normandy, Hagar is turning his back on his desolate homeland and is setting up shop further south. It’s not clear whether he purchased this castle from some impoverished and presumably terrified minor aristocrat with loot he plundered elsewhere or if he just killed everyone inside and is going to move his family in without even bothering to wash the blood off the walls, but one thing’s certain: as far as Helga’s concerned, these are just temporary digs, a defensible base for their clan to occupy while Hagar steals more treasure and gathers more followers until he’s ready to conquer a truly grand palace where she can live in style. Haha, barbarian women, amiright fellas? 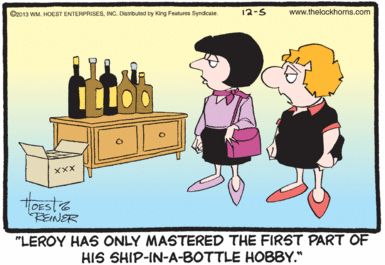 One way that Loretta keeps herself entertained is by coming up with increasingly convoluted ways to say that her husband is a desperate alcoholic.