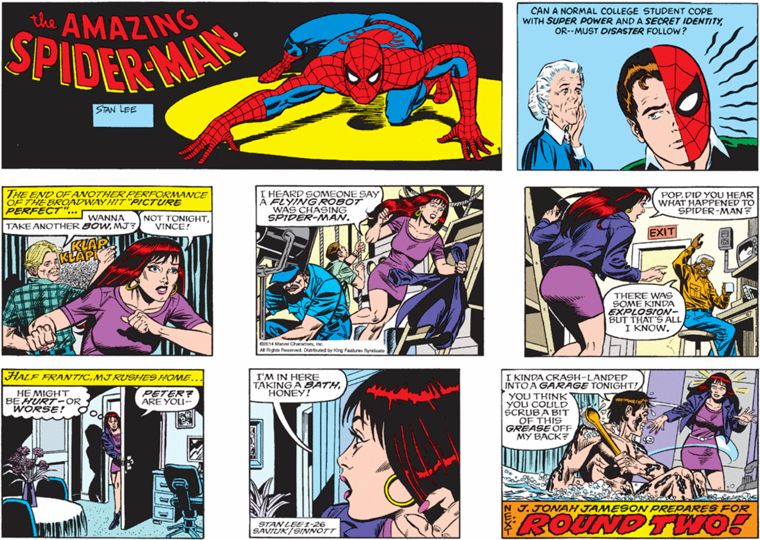 Welp, it looks like all’s well that ends sexily when it comes to Spider-Man’s super-battles! What could be a better reward for this strip’s loyal readership than a naked, oiled-up Peter Parker? We’ll let our characters get their scrub on before we start asking the tough questions, namely (a) how “super” can Peter’s costume be if it doesn’t prevent oil and other filth from soaking through, and (b) why did Peter even bother with that weeks-long battle to prevent his unmasking if his wife is going to make it blatantly obvious to all her co-workers that she’s married to Spider-Man?

This might seem like just an innocent joke about how Francis is a sponge whose weak filial piety is easily overridden by his burning desire not to work, but keep in mind that this is Momma’s dream sequence and her relationship with Francis has extremely unsettling overtones. In other words, this tableau might as well be titled Francis Hobbes: Oedipal Gigolo.

“Why, hello there! I’m the grim spectre of death! As you know, I haunt every single Funky Winkerbean strip, but there are some occasions where my presence is easier to detect! I like the silence in the last panel of today’s strip, because that way everyone can hear the eerie rustling of my robes and feel a chill run up their spines.”