Hey, all, I have some comments of the admittedly truncated week for you, but first, a few items that I maybe should’ve gotten out of the way when I did my recap but oh well let’s do them now! First, I am on a new social media thingie, if you care about that: Instagram! You can follow me at joshreads there. Mostly it’ll be pics of random things I find funny/pretty, occasional horrifying comics panels, and very rare self-promotion. And then there are the other ones I’ve been on that you may or may not know about: Twitter, Facebook, Tumblr, and Google+.

In non-self-promotion news, I have received an anecdote and some charming images from a faithful reader who wishes to remain anonymous:

I’m a reporter for a small newspaper. Every so often, cartoonists will send newspapers customized artwork to thank them for running their strips, which is a nice gesture, because the rights to newspaper comics are astonishingly expensive. If I’m not mistaken, our usual comics package costs nearly four grand per quarter.

My editor has collected a few of these pieces of art over the years, including a personalized autograph from Cathy (not Cathy Guisewite, but the titular noseless wonder herself). Friday at work, I was pleasantly surprised to find this Christmas card from Tom Batiuk in our office. I was particularly surprised since our paper doesn’t run either Funky Winkerbean or Crankshaft.

On the lovingly rendered card, the viewer gets to witness Ed Crankshaft and Funky Winkerbean fighting over a Christmas tree like the miserable bastards that they are. Inside, we see that they have somehow managed to tear the tree in half with their bare hands. They have each taken half, and this perversion of the wisdom of King Solomon has left them briefly contented. 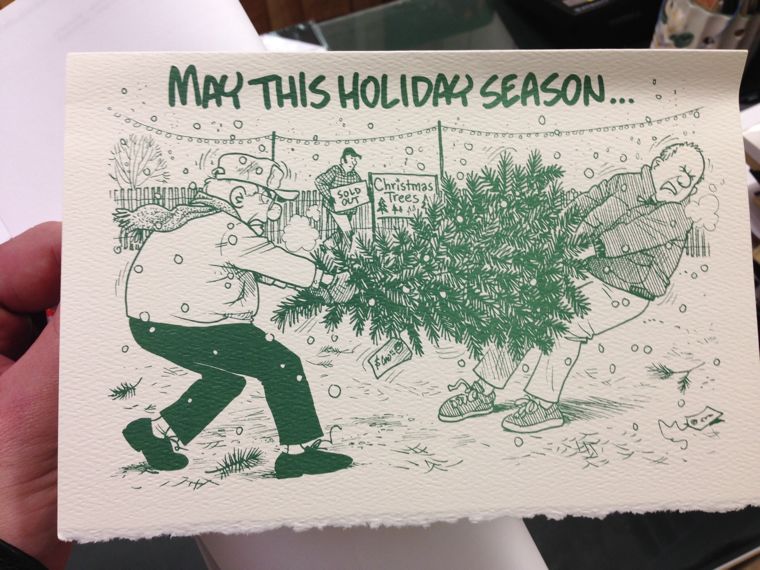 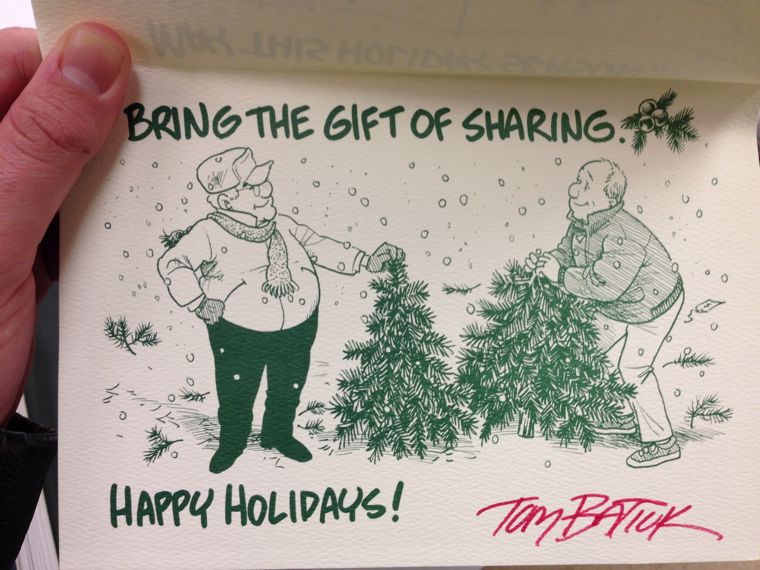 And, finally, faithful reader Wanders, proprietor of the beloved and amazing Mary Worth and Me blog, has put up the nominations for the 2013 Worthy Awards, and you can vote! Vote for Outstanding Floating Head, Most Beautiful Use of Nature, etc.!

And now, with that out of the way: Your comment of the week.

“Hey, when you enlarge panels of Mary Worth, you can see the terrifying madness lurking behind the cracks in our reality! Fun!” –Majicou

“No, Margo, something much better: I learned how to turn Lu Ann into a handsome silver fox! Happy New Year!” –Chip

“I’d like to propose that As Friends Relax be the new title for this strip. It would take a lot of pressure off the writer to keep coming up with, you know, plots and stuff.” –Joe Blevins

“Obvs the Professor has been aged down to jump on this ‘hipster’ wagon that the creators have heard so much about. Hipsters have chin beards, right? And dark, soulless black eyes?” –Amber

“They’re playing a sport where there’s a move called the finger-roll layup, and the best basketball-themed innuendo-about-your-sister they can come up with is, ‘nice moves?’ I don’t know if Gil can reach these kids. I don’t know if he should even try.” –Dan

“I’ve been very much off the grid for the holidays, so I’m only now getting back into checking in with Spider-Man. Not entirely sure what the setup was here though I’m going to assume that J. Jonah Jameson found an old discarded Iron Man suit which Tony Stark threw away due to all the radiation leaks it emitted. The bubbling tumors on the side of Jameson’s head in panel 2 verify my suspicions.” –Chareth Cutestory

“Mr. Jameson … you do know we don’t always have to Skype these things, right? It’s just … you do know you can wash a moustache, Mr. J, right? Just a little water, some shampoo? I’m sure it would look a thousand times better! Also, I’m questioning your decision to put this camera directly in Manbots anus, but there’s no real delicate way to put that.” –Tophat

“Dennis asks Henry to play with him only because all the batteries are dead. When Alice gets home, she will ask him the same thing just for the same reason.” –seismic-2