So when I returned from my Christmastime Journey and caught up on the comics I hadn’t been reading, I didn’t review all the comics. Marvin, for instance. I didn’t catch up on Marvin. Who cared exactly about which poo-stained antics I had missed? I was thus dropped into this midweek running gag without context, and assumed, since there were no other clues, that “Kiddie Coiffe,” a stand of some sort, was meant to be a Starbucks-style operation, with “coiffe” a whimsical misspelling for coffee. And even if I had known that this was coiffe as in coiffure, I would have supposed it was a li’l play hair salon or barber shop? But nope, they’re selling hair. Human hair, dog hair, you name it. Not enough to make a wig out of, mind you, just weird little patches, if the chunk taken out of Bitsy’s pelt is any indication. Haha, baby hair sales! Ha! So, congrats, Marvin: you’ve brought me to a place of profound discomfort that has me actively wishing for a return to poop jokes. 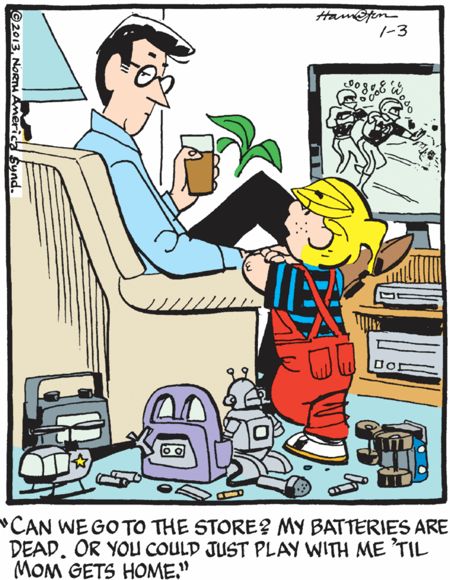 “Look dad, I know you don’t love me, and I don’t particularly want you to try, but I am going to make you tacitly admit it so that I can get what I want.” Oh man, Dennis’s menacing game is on point for 2014.

“Haw haw, just kiddin’, Mama Smif! When I say ‘risky,’ I meant that givin’ birf in Hootin’ Holler is takin’ yer life in yer own hands, what with our hamlet’s poor sanitation and substandard med’cal care!”