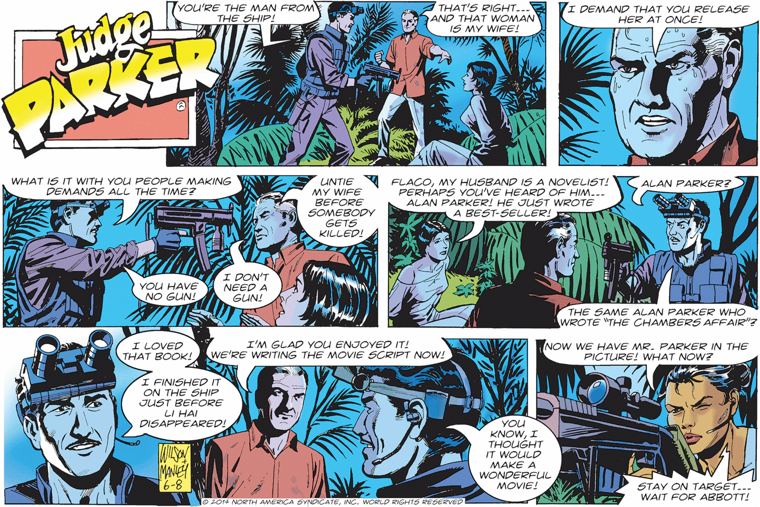 THE MURDEROUS, VILLAINOUS ARMS MERCHANT NAMED “FLACO” WHO’S BEEN MENACING OUR HEROES FOR MONTHS IS GOING TO SPARE THEM BECAUSE HE LOVED JUDGE PARKER SENIOR’S TERRIBLE, UNREADABLE BOOK

THIS IS THE GREATEST POSSIBLE RESOLUTION TO THIS STORYLINE, MUCH MORE BEAUTIFUL THAN I COULD’VE POSSIBLY IMAGINED

Seriously, remember back on the cruise where we first encountered these sinister wedding-ruiners, and Alan read a negative review of his book from an awful elitist Ivy League double-professor, and then later he ran into her on the cruise and he publicly humiliated her, because she had an opinion? That character will have been treated by our narrative with significantly less compassion than Flaco, who sells deadly weapons to the highest bidder in conflict zones worldwide and before that worked for the Securitate, the most notoriously brutal Eastern European secret police of the Cold War era, all because Flaco loves Alan’s shitty spy novel. I love everything about this. Maybe Flaco will stop demanding the diamonds back, as long as they’re invested in turning The Chambers Affair into a terrible, unwatchable movie? Dare to dream!

Sure, Momma is terrible to her kids, but there’s nobody she’s harder on than herself, and it’s often in her dreams and reveries that she really lets her self-loathing run rampant. Here she is imagining being spurned by her husband, in the afterlife! Or maybe just her corpse is being spurned by his corpse? Either way, pretty depressing!