Oh, look, it’s more fun on The Halftracks Hate Each Other Saturday! The joke here, I think, is that while the General might view his zany “KISS THE CHEF” apron as a marker of his laff-a-minute attitude towards life (and it did genuinely take me a minute to parse the idea that “KISS THE CHEF” is supposed to be “funny,” rather than just some kind of weird long-standing cliche), it only serves to remind his wife of his notorious roving eye and lack of affection for her. If that’s the joke, it would have worked better if the Halftracks had been hosting a cookout party of some sort and there were lots of party guests present, pretty ladies among them; we’ve never seen any such thing happen, presumably because the General’s entire social life consists of playing golf with his sycophantic mid-level officers, and his wife seems to have no friends to speak of. In the context of what we actually see here — which is to say, the General is grilling two hamburgers, because he and his wife are the only ones eating and are the only ones there — a more reasonable guess at the punchline would be that Mrs. Halftrack is repulsed by the idea of physical contact with her husband and rebelling against suggestions that she initiate it, though honestly that seems a little dark for this strip.

So this slo-mo intermittent Dick Tracy-Little Orphan Annie crossover is still happening, I guess! Today, Daddy Warbucks is brazenly offering to straight-up bribe whatever city Dick patrols (Neo-Chicago?) so that the police department will assign its best officer to his particular case. He’s … supposed to be a good guy, I think?

At last, the setup promised by this strip has been realized! Anyway, if a deer and a horse can be friends, if by “be friends” you mean “be in proximity to each other for a few minutes while the deer is literally being held in place,” then sure, there is hope for us all, if by “there’s hope for us all” you mean “this alleged deer-horse relationship tells us nothing about the human condition or our potential for happiness or intimacy with our fellow beings.” 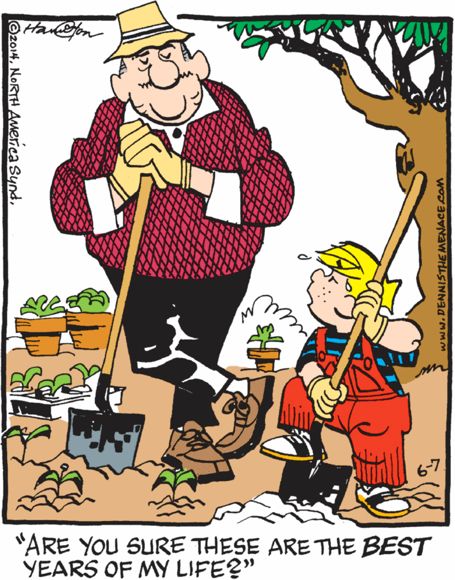 I mean, he’s making you dig your own grave, Dennis, so, probably! It’s not like you’ve got a lot more years to look forward to, if you catch my drift.