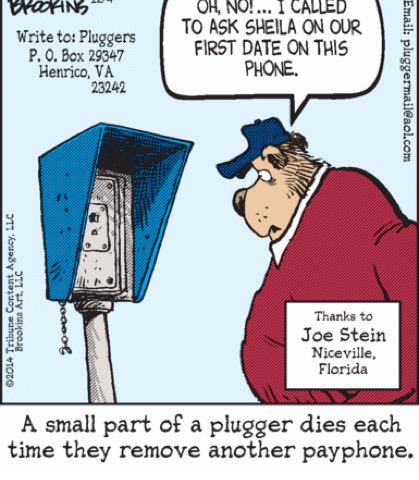 Pluggers usually focuses on the vaguely cheery aspects of life as an aging, downwardly mobile working-class beast-thing, but occasionally the truly grim undercurrent is made explicit. Kudos to Pluggers HQ for going there with the phrase “a small part of each plugger dies” in the caption. Usually a small part of each plugger dies when coronary blockage stops the flow of life-giving oxygen to various limbs, but the bug-eyed stare this man-bear is giving to the useless stump where an outdated piece of electronic equipment once moldered lets us know that this psychic pain is just as real.

Speaking of real pain, Crankshaft is really turning it up this week! Today we’re not even given the glimpse of a punchline, just one of our ancillary characters stewing in agony as his life’s work (which, I should say again, I’m reasonably sure we didn’t even know was his life’s work until this week) dies around him.

Anyway, it’s true that it’s a brutal environment out there for single-screen theaters. Some have been able to make it work by doing special events, live performances, and the like, though most of those are in major urban areas and not decaying rust-belt gloom-towns like Centerville. Still, I have a couple of ideas to improve Crankshaft’s Bald Friend Whose Name I Forget’s business plan: (1) your “nostalgia” flicks probably shouldn’t be widely hated slasher flicks from the early ’00s; and (2) I don’t care if you’re the owner, how about not talking while the movie is playing?