The structure of the joke in this strip is straightforward enough: Dagwood feels good about himself, a state of affairs that will soon be undone by his abusive rage-monster of a boss. But something about the way that everyone around him keeps shouting “Dag swag!” at him seems profoundly off. Are we to view the entire strip as a dream sequence, in which Dagwood’s exaggerated sense of importance and centrality will soon be inverted into persecution at the hands of a cruel father figure? Or is this catchphrase intended to establish the name of a line of Blondie-branded menswear, in a second and hopefully less disastrous attempt to cash in on the strip’s intellectual property? 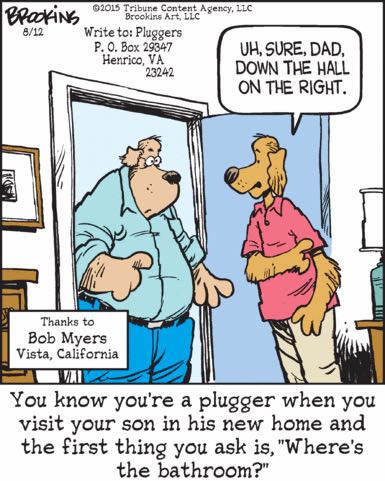 You’re a plugger if you’re a hideous man-beast who, despite walking upright and wearing clothes and owning property, still has the unshakable urge to establish dominance within your kin-group by aggressively urinating in your offspring’s newly established territory.