One of the complaints about the modern-day movie industry is that studios don’t seem to produce midrange movies anymore; everything is either a tiny indie film made on a shoestring or a huge blockbuster action movie or broad comedy. Mary Worth, as usual, steps up to fill the market that Hollywood is ignoring. Sure, the strip provides big hits like Aldomania or Wilbur’s Illegitimate Not-Son; but it also provides smaller, quieter, but still utterly engrossing plots like Ian Kisses Up To His Boss And Toby Remembers She’s An Artist And They Seethe At Each Other About It. I am hooked and I am not ashamed to admit it!

Anyway, today we learn that Toby’s art show, which features a range of greyscale blobs and quadragons, is downtown, and I’m really glad to see the local artist community is helping gentrify a neighborhood that used to be a dangerous hellhole. Maybe it’ll soon be safe enough for even Mary to go there! Meanwhile, Ian realizes that he’ll have to choose between sitting through a boring and presumably outdated lecture from Hilton Berkes about whatever subject he used to specialize in before he took a cushy administrative job and going to Toby’s show and hopefully seeing that warrior in the background of panel once coming to life and murdering everybody. 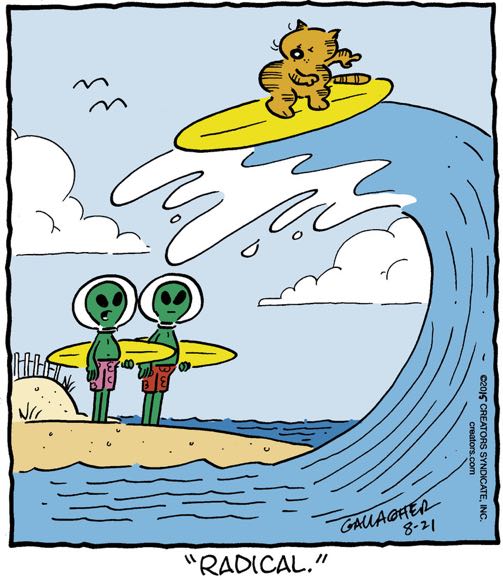 Heathcliff sure had been into surfing jokes lately, huh? Yes, what if a cat were a surfer. And some aliens saw him. And the aliens were also surfers. That would be truly radical, and also whimsical, would it not? God, this makes me exhausted just looking at it.