OK, here’s one of the difficulties in making jokes about aging in an extremely long-running and iconic legacy comic strip. Typically you’d assume that a mother of two teenagers would be somewhere around the 35-50 age range, born in the ’60s at the earliest, and so you can get away with jokes about how ha ha kids today think their parents are so ancient and the parents resent them for it. This extremely doesn’t work in Blondie, though, given that the strip began in 1930 with its title character already a young adult, right around the time the first experimental televisions were being demonstrated. So, like, does Blondie remember when the first TV was invented? “What did you study in French today?” she asks, desperately trying to deflect attention away from her terrifying unaging nature. 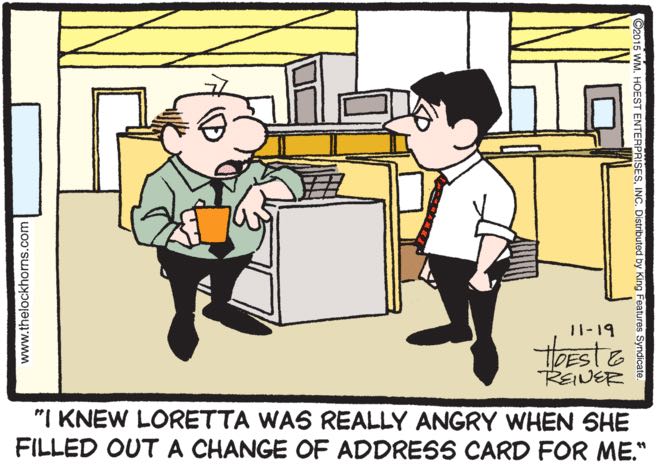 As Apartment 3-G lurches towards its demise so blandly that I can’t even bring myself to cover it here, I gotta give kudos to the Lockhorns for shutting down with a shocking, unexpected twist. Loretta kicked Leroy out and will have his mail forwarded to his new address and now the strip is over! Fans everywhere can take heart that this long-suffering couple can finally move on with their lives, emotionally.

Momma, too, has unexpectedly decided to end its decades-long run today. This conclusion is a little derivative of the final episode of St. Elsewhere; but still, the revelation that Momma’s “children” are just tiny figurines that she manipulates at her whim explains a lot about the tone of the strip. Anyway, kudos for Momma and the Lockhorns for going out on top! Looking forward to whatever will be taking their place in newspapers nationwide tomorrow, probably a tire ad or something.