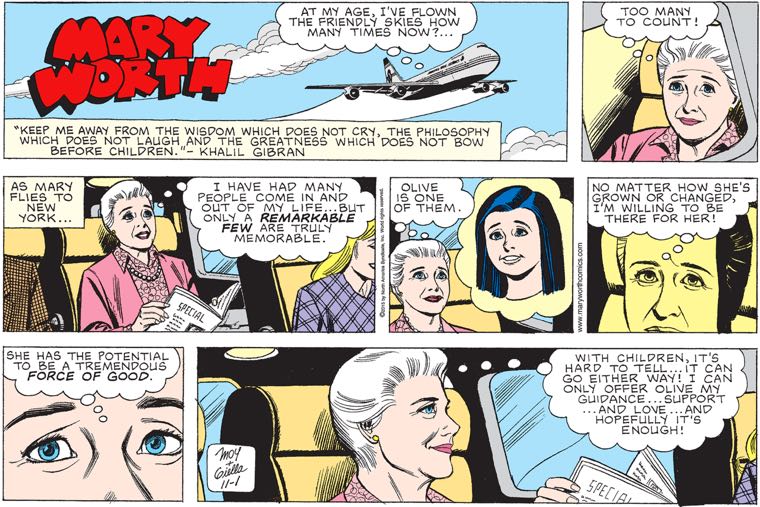 As Apartment 3-G’s impending shutdown has shown, it’s a tough market out there for soap opera comic strips. Losers fade; winners adapt. That’s why Mary Worth is, right before our eyes, pivoting into the kind of action-oriented comic today’s readers crave. Olive is a young girl with supernatural powers. Today’s she’s only demonstrating prescience, but soon she might be able to move objects with her mind … or even kill. That’s why she needs Mary at her side to guide her to adulthood and keep her moral code intact. It will be a dangerous journey. It could go either way. But in Mary Worth, we’ll see Olive become a tremendous force of good, on the comics page — and, if we play our cards right, in a Netflix original TV series in the spring of 2017! 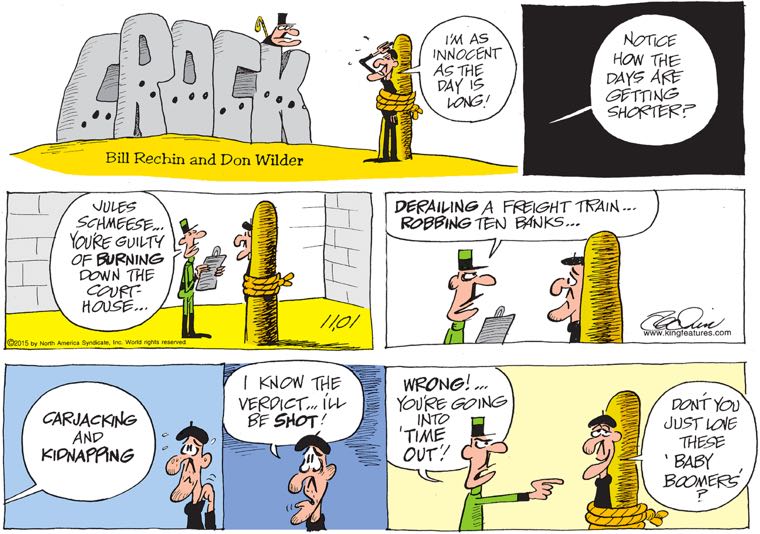 The other day I was on the bus, and there were these two guys, one probably in his late 50s, the other in his 20s, and I’m pretty sure they didn’t know each other but were chatting in that way people on long bus rides sometimes do. I sat down near them in the middle of the conversation, so I’m not entirely clear on the context, but the younger guy was describing how his cousin (presumably around the same age) had committed suicide, and the older guy said, “Yeah, the Millennials are all weak-minded, I grew up in the ’70s when we were tough,” and I was completely flabbergasted. Anyway, it’s pretty common sport for anyone over 35 to shit on Millennials these days, and one of the great things about having comics like Crock written and drawn by very, very old people is to remind us that every generation was once young and irritating and viewed by its elders as worthy of unique and particular contempt. Don’t worry, kids, you’ll be old soon enough, and then everyone will forget all the selfie jokes.