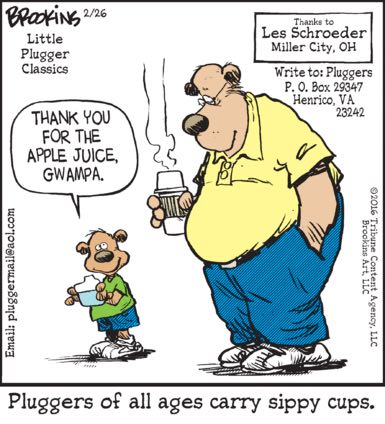 I’m gonna tell you something: at first, this panel made me actively angry. And not for the reasons that Pluggers usually makes me angry, which is that it generally posits that city dwellers who keep up with pop culture are effete traitors who will be “dealt with” after the real American resurgence. No, I’m mad because the “plugger sippy cup” depicted here is from Starbucks or one of its ubiquitous knockoffs, which is exactly where effete city dwellers go for overprices frappawhatevers, whereas true pluggers drink cheap and horrible coffee out of a ceramic mug at a diner with a free refill policy. But then I realized that, no, that’s the plugger of 10, 15 years ago I’m thinking about. Starbucks has long penetrated every suburb and exurb out there, and those nostalgia diners have been by and large driven out of business, only surviving in cities where kitsch appeal keeps them going. This, after all, is the essence of pluggerdom: embracing the newfangled when it isn’t newfangled anymore, all the while maintaining that this is how you’ve always done it, and that Other People out there are doing it newer, and wronger, and badder.

Remember, Hagar is a warrior chieftain in a society built entirely on plunder, so yeah, he “fought like an animal” in the sense that he was merciless and probably the other guy was dead by the end of the process.