Welp, congratulations, Blondie! It’s only Monday and you’ve succeeded in thoroughly baffling and unsettling me. What could the nickname “Ol’ Stork Baby” possibly represent? Obviously it was foisted on this poor individual against their will, since Elmo’s use of it got him sent to detention. “Stork” might be meant to refer to someone as tall and gangly, and might be what a 75-year-old would think a child would say, but it’s the addition of “baby” that really throws me off. Did this unfortunate teacher not learn the basics of biological reproduction until later than socially acceptable? Did he or she proudly announce that they’d been delivered as an infant by the stork in their adolescent years, resulting in permanent derision? Is this some telling commentary on society’s treatment of sexuality: we’re too embarrassed to speak of it forthrightly, but will also shame and humiliate those who don’t understand it? 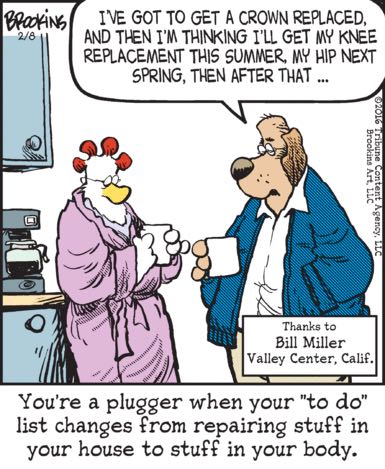 Piece by piece, pluggers are being rebuilt. Better than before. They’re more machine than man-animal now. Soon they’ll be unstoppable.