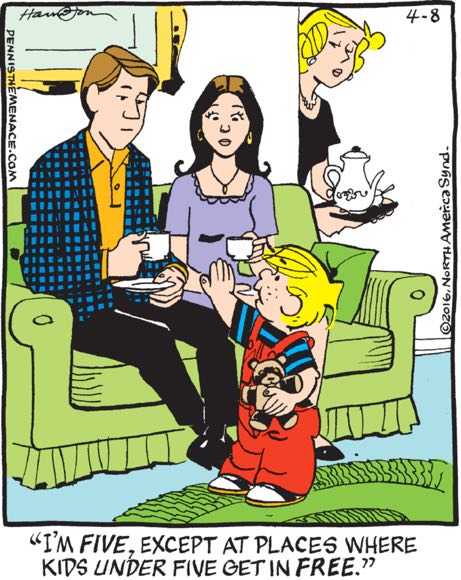 I’m really enjoying this young couple’s facial expressions as Dennis regales them with tales of his family’s casual and profitable lies. The woman seems flabbergasted, horrified to learn that the Mitchells have taught their child that it’s OK to speak untruths, as long as you can save a little money by doing so. The man, however, is steeped in ennui, as if this is totally in line with what he knows about the deceitful nature of humanity. “Mmm, the child doesn’t seem to even resist spinning this web of falsehoods, and why should he? People need to be taught to be good, and we as a society haven’t been teaching them very well for a very long time.”

Cliff Anger’s name is very appropriate — not because of the cliffhangers that were the most prominent features of the Starbuck Jones serials in which he starred, but rather because he’s angry, so very, very angry, about a world that passed him by and the young people who now inhabit it. Fun! Anyway, I dearly hope those ellipses in his word balloon in the final panel represent significantly long pauses. “I … D … I know you know what’s coming next but you’re still gonna have to wait around for me to finish, you little fucks … L …”

Oh hey everybody, the non-old-people-sweatshop plot in Judge Parker just resolved itself off-panel, in case you were worried! Rocky! You gotta love that guy, if by “love” you mean “worry about him constantly, in ways that you may or may not be paid to do!”