The novel I finished last year, The Enthusiast, is about, among other things, surreptitious marketing — marketing that doesn’t look like marketing, things that come together behind the scenes, things that look like coincidences but are secretly orchestrated by cunning agents working to push their clients’ wares. So, for instance, in the world of The Enthusiast, the fact that a beloved soap opera strip character is suddenly selling her book right around the time that I’m trying to sell my book, which has an entire plot about soap opera comic strips, would be no accident, but would’ve been carefully orchestrated in secret. In real life, of course, it’s a total coincidence. Do you think we’d be talking about Sarah’s dumb horsey book and not neighborhood pinhead Franco Wallace if I had that kind of pull? Come on now.

But, since the topic has been presented to us, I might as well talk a little about book marketing. Namely, my book was funded by a Kickstarter and I don’t really have a marketing team! Sarah and Dolly Pierpont don’t have a traditional marketing team either, of course, just a network of thuggish mob enforcers wandering into museums everywhere and noting idly that this new horsey book is available and would be real good seller if it were displayed prominently in the gift shop and it would be a shame if someone accidentally soaked all those Dutch Masters hanging in the east wing in kerosene and set them on fire. My only mob enforcers are you, my faithful readers, and I implore you to spread the word about The Enthusiast not with violence, but with enthusiasm! Tell your book club! Post the link on your Facebook wall! Have me on your podcast, or radio show, or daytime television program! I promise I’m pretty funny and personable. And come to my book tour, if you’re in Washington, D.C., (tomorrow!) or Baltimore (Thursday!) or New York City (next Monday!) or Buffalo (next Wednesday!), and bring a friend or three! Let’s show these gangsters the right (i.e., significantly less profitable) way to market a book. 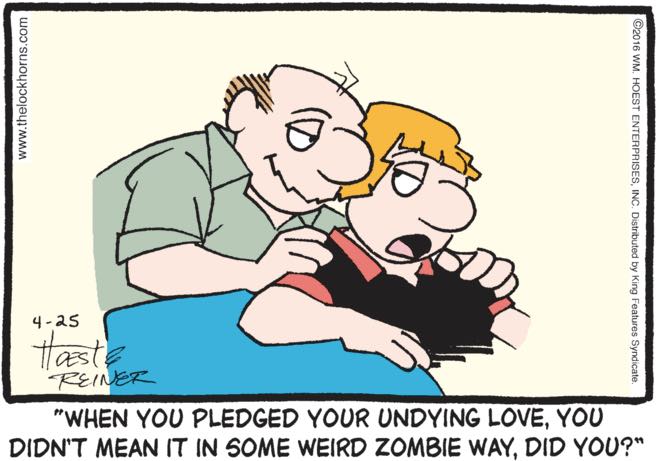 Oh, don’t worry, Loretta, he meant it in a weird “alone together in a featureless void where time has no meaning and your very corporeal form begins to bleed into nothingness around the edges but your soul remains eternally locked in a hateful relationship with your spouse who you can never leave or avoid or be apart from for a single moment” way!