Hello, all! Some administrative things before I get to the long-awaited comment of the week! First off, everyone who contributed to the fundraiser should’ve gotten thank-you notes at this point. (If you didn’t, shoot me an email at jfruh@jfruh.com, and update whatever email you have on record at PayPal!) Everyone who donated more than $25 also got a link to a survey to fill out if they wanted a tote bag! I thought had been pretty clear that you needed to put your name and address into the text box on this survey, but apparently I wasn’t, because some people just put their address, or just put “yes” or some variation thereupon. If you think you are one of those people, please go fill out the survey again! I’ve made what you’re supposed to do more obvious now. If you think you are one of those people and have deleted the email from me with the link, please shoot me an email at jfruh@jfruh.com and I’ll re-send it.

ALSO: I know this is basically no notice, but if you are in Los Angeles tonight and are looking for fun entertainment in which I will say humorous things at you, consider this standup show of Star Trek themed material, tonight at 7 pm! It’s Karma Lounge in Koreatown, 3954 Beverly Boulevard. 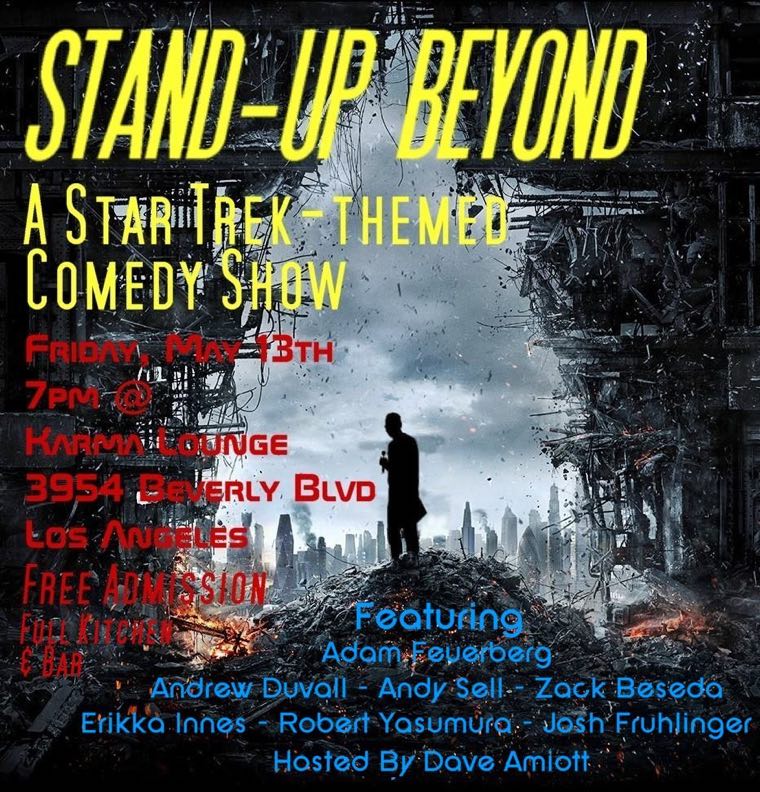 There are drinks and a full kitchen! And nerd jokes! What could you possible have to lose? Here’s the Facebook event, please come!

And now, finally, at long last, your new comment of the week!

“So Mary Worth remains subdued, conventional, and four-panel during the week, but on Sundays explodes into vibrant and amazing art so far beyond the conventional weekday routine as to be fantastic. This is the least moving tribute to Bill Watterson ever.” –Dragon of Life

“I’m saying you better get that tongue limbered up because I’m out of batteries, too.” –Tigernan Douglas Quinn, on Facebook

“You know you’re a plugger when the ‘shot glass’ you used in college holds eight ounces, because you were in college during Prohibition.” –Spunky The Wonder Squid

“Your life just gets crazier. Back in college you were merely drunk every night. Now you take so many interacting drugs you think you’re a Keeshond in a flannel shirt.” –Artist formerly known as Ben

“I recognize you, Xandu — a sorcerer of regrettable moustache. So, what do you kids think of my jolly unicorn? I call her ‘Strawberry Shortcake!’ You can pet her if you want!” –Ukulele Ike

“We could sit around all day discussing the particulars about how storylines and plot points and all the elements that go into crafting an engaging, riveting tale. For now, though, let’s just acknowledge this unfolding masterpiece — a bus, stuck in traffic, desires to escape traffic.” –Chareth Cutestory

“I will never tire of Mary Jane reacting to supernatural events with a vague sense of detached annoyance. Spending so much time with Peter seems to have completely worn away her ability to even feign interest.” –Enlong

“Where does a major player like Nightmare recognize Xandu from? Is there a scouting service which identifies up-and-coming sorcerers? Is there a magic combine? Does the book on Xandu read, ‘Good with restraining spells but prone to irrational bouts of infatuation. Needs to work on his banter to reach the next level. Spells Above Replacement 1.2.'” –But What Do I Know?

“In the context of a 6-1 loss, ‘ripped a double’ means he shat his pants and the bed.” –Effluvius Erratus

“Judge Hiatt is the toughest around when it comes to drunk driving. Drunk anything for that matter. What did you blow: a .09? That lady needs .09 just to get her gavel-hand steady.” –Irrischano

“Whoops! I think the artist has given Jeff entirely the wrong facial expression in panel one. That particular face is only to be used when he’s telling his wife something like, ‘Marvin’s asleep. I soaked his Zwieback in whiskey, so he should be out for hours. Wanna try and fail to have sex?’ It’s perfect for that, but all wrong for a chat with the IT guy at work.” –Joe Blevins

“ATTENTION PARENTS: THERE’S A DEADLY NEW DRUG CRAZE SWEEPING THE NATION’S YOUTH! What you don’t know about BUTTERFLY SNIFFING could KILL YOUR CHILDREN! Find out the tell-tale signs and what you can do to protect your family, tonight on Action News 11!” –pugfuggly

“Know what I miss the most? Cigarettes blocking out the foul aftertaste of drinking urine samples!” –hogenmogen

“Applesauce is a nice way to make tough birds softer and its sweetness pairs well with gamier poultry. So I second Roz’s horrified expression; who in their right mind would consider eating vulture when there is so much chicken and duck available in their town?” –Alex Blaze

“Wait, Tawdry Windfall isn’t a character in the strip? Maybe it’s the search words one uses to find Judge Parker on Google.” –maltmash3r