I sort of thought I was joking earlier this week but no, it turns out they really are killing off Rose! They’ve been doing this arts-y jumping back and forth over two weeks or so of strip time, and I suppose it’s possible this funeral scene is going to be a dumb fakeout, but it sure does seem like she’s dead (of cancer, natch). You have to almost admire the perversity of today’s strip, in which the grim punchline is put into the first panel and then the second panel is just a son staring at his hated mother, waiting for her to die.

Meanwhile, Hagar the Horrible shows you how to land a really solid “ha ha, it’s funny because he’s old and dying” joke. 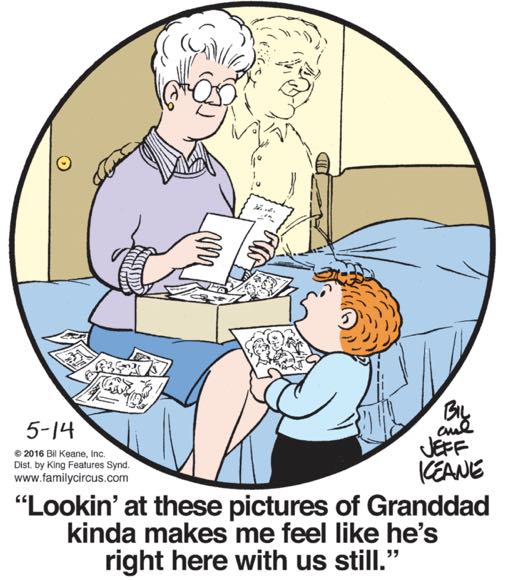 As near as we can tell, most human societies have believed that the soul lives on after death in some form for all of history. What if, ironically, this only became reality once we mastered the art of photography? In the 19th century, processes beyond our ken began tying the ghostly echoes of our loved ones to the visual representations we produced. The more pictures we took, the stronger the undead entities became. And now that we store thousands and thousands of perfect digital images … in the cloud … the consequences will be too terrible to imagine.

People may doubt Ian and Toby as a couple, but I think it’s adorable how she always looks for a way to slip her wedding vows into daily conversation!