Hey all, your comment of the week momentarily, but first: remember the live twice-monthly Internet-themed comedy show I promised you, in Los Angeles? Well, the first one is less than a week away! 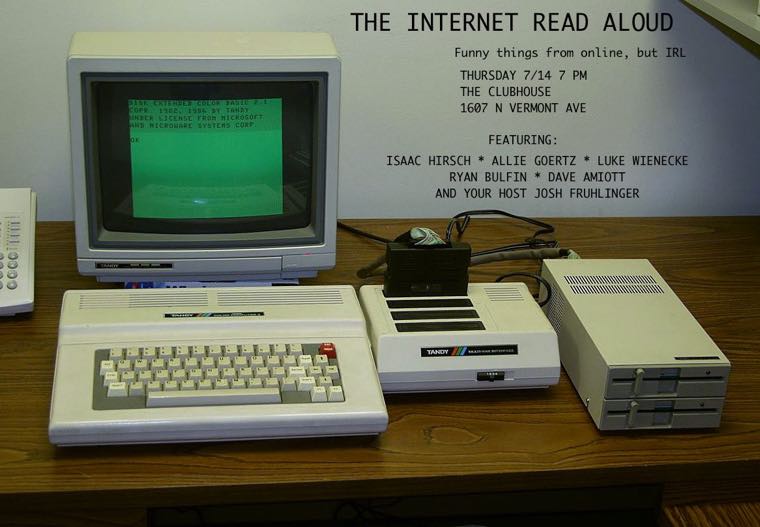 Come to the Clubhouse in Los Feliz, 7 pm this coming Thursday, to see me and five other folks make Internet-derived jokes! It’s gonna be a great show and you need to get in on the ground floor. Here’s the Facebook event, if you like Facebook events!

“Mary Worth finally acknowledges that, in Mary’s world, all other characters are but human freight, introduced to serve their function and then trucked out by the gross when obsolescence arrives. Only Mary persists, because only Mary is necessary in her monstrous simulacra of the real world.” –lrubinko, on Tumblr

And here are the very funny runners up!

“Before Hi could break the law his family had to break his spirit.” –Philip Moon, on Twitter

“There aren’t enough bitter insults to go around — more than two would almost be like showing interest — so Ditto has to show his contempt silently, which he handles quite well with hands in his pockets, a slouch and a sneer.” –Handsome Harry Backstayge, idol of a million other women

“‘Do you hear anything?’ Miss Buxley asks Beetle, the fear and agony apparent in her voice. The clams had already broken her arms for attacking one of their own and she dreaded what might happen next.” –ericrhouston

“This new version of The Walrus and the Carpenter isn’t very good.” –made of wince

“How do we know Hootin’ Holler is impoverished? They can’t even afford the obligatory baguette sticking out of the grocery bag.” –Rusty

“Say what you will, but I’m glad the artist forgot that Tommy got a stupid normie haircut to impress a waitress and others outside of prison. The glorious golden meth-locks are back, and they’re here to stay, baby!” –Bryan J. Simmons, on Facebook

“If you let him ride in the front seat and stick his head out the window you’ll be halfway to the vet’s office before he even knows what’s going on.” –Artist formerly known as Ben

“Oddly enough, ‘Ugh … Okay.’ is what I say every time Mary Worth is featured here.” –Lorne

“A hospital ate Tommy’s father and slowly digested him. It was horrific.” –Ettorre

“Add an atonal soundtrack and we’ve got a good start on a no wave film here. What’s Vincent Gallo doing these days?” –Pat Ferruzza, on Facebook

“‘You were over-throwing, putting your arm as risk.’ ‘Beneath a veil of brine and tears my eyes were blinded; I was conscious only of the cymbals of the sun clashing on my skull, and, less distinctly, of the keen blade of light flashing up from the aluminum bat, scarring my eyelashes, and gouging into my eyeballs. Then everything began to reel before my eyes, a fiery gust came from the stands, while the sky cracked in two, from end to end, and a great sheet of flame poured down through the rift. Every nerve in my body was a steel spring, and my grip closed on the ball. My elbow wound back, and the jagged crisscross of the stitches jogged my palm. And so, with that crisp, whipcrack sound, it all began. I shook off my sweat and the clinging veil of light. I knew I’d shattered the balance of the day, the spacious calm of this mound on which I had been happy. But I fired four pitches more into the empty strike zone, on which they left no visible trace. And each successive pitch was another loud, fateful rap on the door of my undoing.'” –Effluvius Erratus

“So we’re finally getting to see the strip’s recurring Frank Nelson-based snippy store clerk character dressed in something other than an old-timey suit, and it turns out he’s fit as hell.” –BigTed

“Wait, are they supposed to still be in that ratty strip mall pawn shop? Look at that enormous room filled with opulent gewgaws behind them. I guess Charles Foster Kane really needed some quick money for Oxycontin.” –Doctor Handsome

“‘I’ve planned a vacation — just for the two of us!’ Mark said after he’d turned his head away from Cherry. To whom was Mark speaking and what will Cherry do while he’s gone? Stay tuned to find out!” –Spunky The Wonder Squid

“Look! The moon is turned on all the way tonight! Is that why you were in such a hurry to get us up to the cabin? I don’t know why you put us in a cage up there every month, its not like we make any troublrrrRRRRRR OOOOOOOOOOO” –Chareth Cutestory