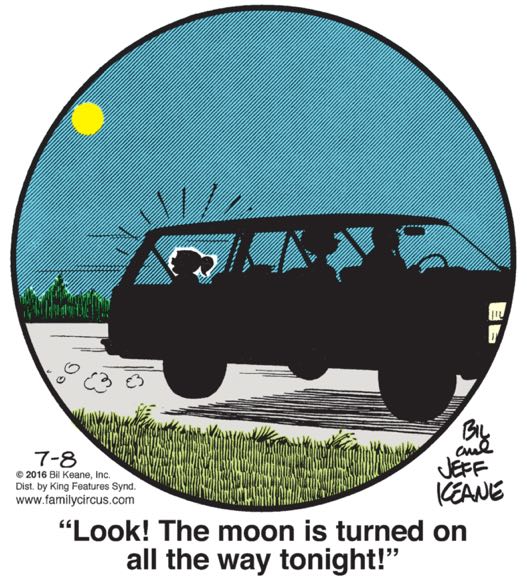 One of my favorite things about the way the Family Circus constantly reuses art that’s decades old is that somewhere along the line some editor realized, “Oh, crap, everyone is supposed to wear seat belts now! The Family Circus, as an incredibly influential part of today’s media, can’t afford to send the dangerous message that not wearing your seatbelt is ‘cool!’ Looks like we’re going to have to add seat belts into all the old art, when we inevitably reuse it!” This has produced laughable results like today’s panel, in which, if I know my classic American station wagons, Dolly is supposed to be sitting in the “back back” or “way back,” i.e., the storage area where there’s no seat of any kind, where all of us kids born before 1980 or so were free to just roll around without any restraints or safety equipment and died in droves. Anyway, please join me in enjoying that seat belt, coming out of nowhere, hooking over Dolly’s back, and connecting to nothing. It almost makes me sad that once we got to the era when all children under the age of 10 had to be in car seats everyone involved in the production of this strip was just like “Enh, screw it.”

Hey, remember when Mark’s face accidentally fell on Carina’s face, back in the cave, and she tried to get him to do sex things with her, and the first thing he thought of to make her stop trying was to say “Yes, Carina, I am happily married”? Well, that definitely counts as being “made” to decide take some time off and invest in his relationship with his wife. Presumably they’ll voyage to the mysterious South Pacific, to frolic on a beach where they’ll discover these lovebirds’ mouldering corpses.

I’ve sort of assumed that Kit Jr. was going to Tibet but I think they’ve only been saying “the Himalayas” so I guess it’s possible he’s headed for a Buddhist monastery in the northern fringes of India, or Bhutan or Nepal, which would qualify, barely, as “the subcontinent.” Still, has he considered that the monastery probably doesn’t have Internet? Also, you know where there’s Internet? The Skull Cave! He could learn a lot about the subcontinent back at the Skull Cave, is what I’m saying.