Guys! Next Thursday, in Los Angeles, you should come see my semi-monthly live comedy show featuring jokes based on material from the Internet but then interpreted and added to live, The Internet Read Aloud! 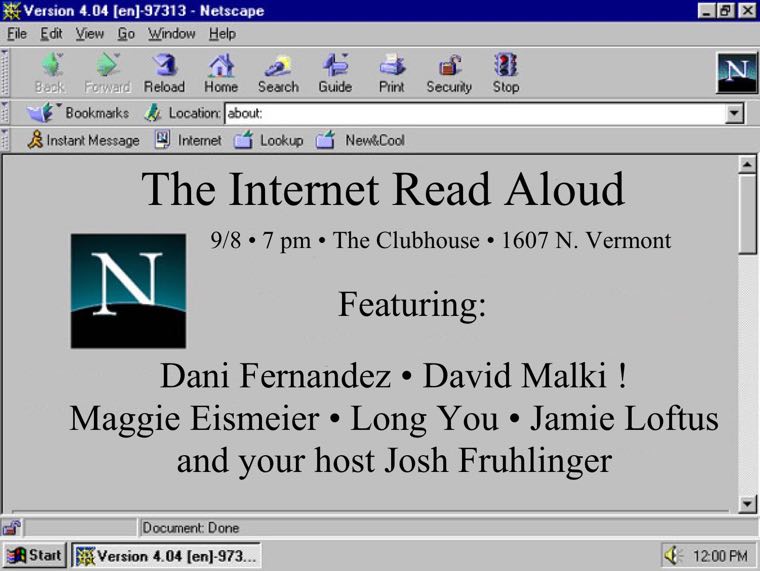 I’m really excited about all the comics we have on the bill this week, plus I’m going to be doing a bit about one of the two extremely minor Internet controversies I found myself embroiled in this month! Don’t miss it! And if you’re coming, tell me you’re coming on Facebook, why don’t you?

Another thing you shouldn’t miss: this week’s comment of the week:

“‘Dings’ are what I call my husband’s debilitating head injuries. Cute, right? I like to keep things light. So … when’s the Lisa’s Legacy run? I want to do my part to help people with uh-oh bye-bye disease.” –made of wince

Don’t sleep on the runners up, either!

“You might think it’s condescending for the Parson to hold up three fingers to illustrate the concept of ‘three’ to Snuffy. But just look at the transfixed stare on Snuffy’s face at that moment. This is clearly necessary and appreciated.” –Joe Blevins

“Dennis has been caught in an unending nightmare, and whenever he awakes he finds the bad dream just starting again. On the bright side, he and his parents have something in common now.” –Artist formerly known as Ben

“Hmmm. Which of Dennis’ toys were trying to murder him in his sleep? The wagon seems unlikely, even though it did manage to get on his bed. Perhaps the piggy bank, sick and tired of being fed money, was planning to choke Dennis to death with a handful of pennies? It certainly has the look of someone pretending to be innocent. But we can’t discount the bear, a avatar of a brutal and savage species, that even in stuffèd form knows hate. And yet, my money is on the horrific sigil on the wall behind Dennis. We can see the hints of a halo, but it is no angel. It has drawn three X’s, for three strikes, over Dennis’ head. You’ve had your time, Dennis, but three strikes, and you’re out. Dennis’ parents will calm him, and he will reluctantly return to slumber, only to awake a final time as an inky tendril detaches from the wallpaper and slowly, so slowly, crawls into his ear.” –Voshkod

“Original caption: ‘These pills of yours are somethin’ else, Grandma! I took the whole bottle and I feel great! We’re goin’ to the hospital? Whoo hoo! Can I stick my head out the window like Barfy does? Boy am I sweatin’ like crazy!'” –Spunky The Wonder Squid

“So this guy found the beaten and bruised body of Dick Tracy somewhere, maybe on the shore of the reservoir, and brought it home somehow, maybe in a wheelbarrow. And put it in his basement. Then yesterday he was making himself a nice cup of tea. Then he had a longer-than-he’d-have-liked chat with a cop at the door. The payoff is that, when Tracy goes into arrest, voids his bowels and goes stiff, ol’ Nigel Moustachio there is going to say, ‘Poor devil, his trenchcoat just wasn’t thick enough.’” –handsome Harry Backstayge, idol of a million other women

“A Funky Winkerbean-themed event on September 11? Have we reached the Sadness Singularity?” –Flonatin of Bologna

“I don’t know why I’m nattering on, Les, you’ve known Bull for years. Oh wait, that’s right, you’re a self-centered jackass. So here’s a photo of Bull beating you up on spring break.” –Little Blue Bicycle

“Elvis depicted as a human is a classic work of Plugger Surrealism.” –nescio

“Then for the next forty years he lived off despair and shitty pizza which further restricted the blood flow to his already half dead organ. His brain wasn’t doing well either.” –Mikey

“Looks like if you wear the right hat and concentrate really hard, you can use the Power of the Force to open child-proof pill containers. That’s how I get my Vicodin, anyway.” –hogenmogen

“Yeah, that’s the look of a dog doing something unspeakable to the upholstery.” –Pat Ferruzza, on Facebook

“The teacher has written to ask if she can hire Dennis as her interior decorator. In the meantime, Dennis contemplates whether it makes sense to knock down that wall for a more ‘open concept’ look.” –Lawyerbob

“That guy’s hairstyle isn’t actually a man bun, but what the hipsters are calling the ‘half Leia.'” –BigTed